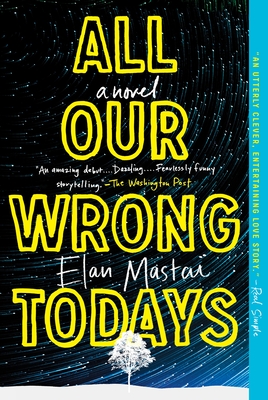 Our booksellers Jenn & Rebecca got the chance to ask one of their favorite authors five questions. Of course they couldn't stop at just five...
Elan Mastai is the author the book All Our Wrong Todays and has been a screenwriter for the past fifteen years.

1. The concept for All Our Wrong Todays  is such an original twist on time travel. How did you come up with it?


I built a time machine and made some really bad personal decisions. The novel is basically autobiographical. No, look, I love time travel stories but it always bothered me that they rarely take into consideration that the Earth moves. Like, really fast and really far every single minute of the day. Traveling back in time even a short duration also means traveling in space an immensely far distance. I thought it would be fun to imagine a method of time travel that took actual orbital mechanics into consideration. From that super nerdy technical point the novel’s plot—which thankfully has very little to do with orbital mechanics—grew. I’d also been thinking a lot about how our ideas of utopia and dystopia had evolved since I was a kid and when it occurred to me I could combine both ideas, the novel slid into focus.

2. What authors or works have inspired you?

3. Do you think the utopia in All Our Wrong Todays  would be a world you would want to live in?


Totally! As a husband, father, son, brother, and friend, it wouldn’t be a true utopia without the people I love. But, I mean, flying cars! Robot maids and teleportation and space vacations! Of course I’d want to live there. The “utopia” I write about isn’t without its blind-spots and that’s something my protagonist Toms struggles with as his circumstances change. But every society has its blind-spots. One of literature’s main jobs is to illuminate and question them.

4. If you could go back in time, what would you like to witness?


When it comes to time travel, people tend to be divided between those who’d want to witness the great moments of history and those who’d want to revisit the intimate personal experiences that define their lives. I’m more of the latter. I’d want to witness the moment I met my wife for the first time. Or the day my parents met. I’d like to spend time hiking the hills of Morocco with my father’s father, who I never got to meet, and play basketball in Depression-era New York City with my mom’s father, who I only knew well-after he could sink a jumpshot. I’d like to taste my grandmother’s cooking again and taste the flavors of her childhood in Vienna. Or just have a conversation with my mom, who died seventeen years ago, before I’d figured out what I was going to be when I grew up. Of course, I’d also like to visit England in the early 1600s to witness the very first production of Macbeth, although I’d probably have to wear a haz-mat suit to avoid dying from viral infections. Time travel is so complicated.

5. In the book, Tom unravels time after being rejected by a woman. What’s the dumbest thing you have done after a breakup?


Wrote a movie about it starring Harry Potter and Kylo Ren. Which actually worked out pretty well. Maybe I should do more dumb things…

6. You do a lot of work in movies, could you ever see this being adapted for the big screen? What do you think would be the biggest challenges? Who would you cast?


I’m actually in the middle of writing the movie adaptation right now, so this is all-too relevant. The biggest challenge is time. The novel is 369 pages. The audio book, as a comparison, lasts ten hours. But with a movie I only have around two hours to tell a complex story with a lot of big plot twists and equally important emotional moments and psychological revelations for the characters. Compressing the story without losing all the things I love about it is tough, but it’s fun too, because movies can do all kinds of things that books can’t—and vice versa. In terms of who I’d cast… I can’t answer that right now for some really good but confidential reasons. More importantly, who would you cast? I love that while the book is still only a book, the reader can picture whoever they want.

7. What are you working on next?


Other than writing the movie of All Our Wrong Todays, I’m working on a second novel and a couple of other movie projects.