A Death in Belmont (Paperback) 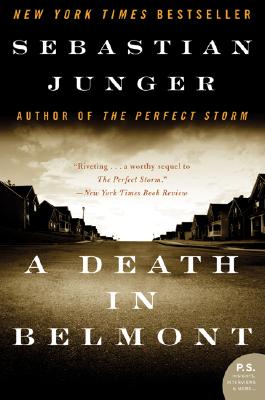 In the spring of 1963, the quiet suburb of Belmont, Massachusetts, is rocked by a shocking murder that fits the pattern of the infamous Boston Strangler, still at large. Hoping for a break in the case, the police arrest Roy Smith, a Black ex-con whom the victim hired to clean her house. Smith is hastily convicted of the murder, but the Strangler's terror continues. And through it all, one man escapes the scrutiny of the police: a carpenter working at the time at the Belmont home of young Sebastian Junger and his parents—a man named Albert.

A tale of race and justice, murder and memory, this powerful true story is sure to rank besides such classics as Helter Skelter, and The Executioner’s Song.

SEBASTIAN JUNGER is the New York Times bestselling author of Tribe, War, A Death in Belmont, Fire and The Perfect Storm, and co-director of the documentary film Restrepo, which was nominated for an Academy Award. He is also the winner of a Peabody Award and a National Magazine Award for Reporting. He lives in New York City with his family.

“Junger’s clear, beautifully reasonable writing is the literary equivalent of night-vision goggles....He’s navigating a maze of shadows, and you can see all the more clearly what an enormously skillful prose artist he is....Junger entrances the reader by picking out small details that give the events he’s describing an enthralling vividness and resonance and clarity." — Time magazine

“[I] couldn’t put it down for four hours—and then did so only because [my] flight had landed.” — Newsweek

“Riveting...reads like a novel. Its narrative line is crisp....a worthy sequel to THE PERFECT STORM.” — New York Times Book Review

“As Junger showed in his bestselling The Perfect Storm, he’s a hell of a storyteller. . . . This perplexing story gains an extra degree of creepiness from Junger’s personal connection to it.” — Publishers Weekly (starred review)

“[Junger’s] a hell of a storyteller.” — Entertainment Weekly

“Junger has done a remarkable job in recreating the story of the damaged little boy who became a serial killer, and those whose lives he changed....Reading Junger, one cannot help being reminded of Truman Capote’s brilliant reconstruction of another brutal slaying, In Cold Blood, and noting that he stands the test of comparison.” — Daily Mail (London)

“Best-selling author Junger gives us a fresh look at the Boston Strangler crime story by examining his own family lore....Junger has written a well-documented page-turner that leaves us wanting more.... Highly recommended." — Library Journal

“A meticulously researched evocation of a time of terror, wrapped around a chilling, personal footnote.” — Kirkus Reviews