Putting the One Minute Manager to Work: How to Turn the 3 Secrets into Skills (Hardcover) 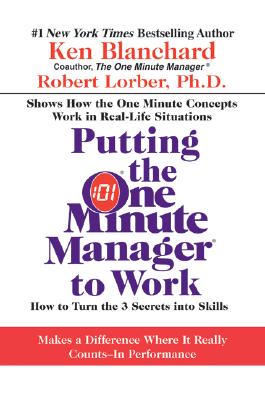 By Ken Blanchard
$22.40
Not Available

The second book in this record-breaking series, Putting the One Minute Manager to Work, turns the three secrets of One Minute Management into day-to-day skills and shows how they work in real-life situations.

By going straight to boardrooms and assembly lines for their examples, the authors put the One Minute concepts into working systems that directly affect a company's bottom line. Here is the next step in the revolutionary, simple, and uniquely effective system that is changing how the world runs business.

Ken Blanchard, PhD, is one of the most influential leadership experts in the world. He has co-authored 60 books, including Raving Fans and Gung Ho! (with Sheldon Bowles). His groundbreaking works have been translated into over 40 languages and their combined sales total more than 21 million copies. In 2005 he was inducted into Amazon's Hall of Fame as one of the top 25 bestselling authors of all time. The recipient of numerous leadership awards and honors, he is cofounder with his wife, Margie, of The Ken Blanchard Companies®, a leading international training and consulting firm.