What Obama Means: ...for Our Culture, Our Politics, Our Future (Paperback) 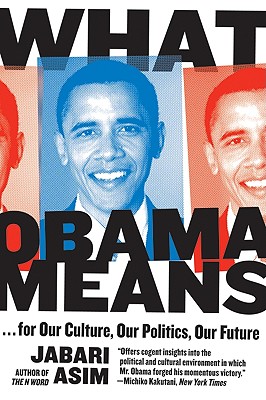 “It should be on the required reading list.”
—Chicago Sun-Times

What Obama Means by Jabari Asim, renowned cultural critic and author of The N Word, is a timely and sharp analysis of how the “Obama phenomenon” exhibits progress in American politics and society. A frequent guest and commentator on “The Colbert Report,” “The Today Show,” NPR’s “Diane Rehm Show” and many other media programs, Asim also examines how cultural and political forces led to the watershed 2008 presidential election while indicating what the election means for every American.

Jabari Asim is the author of the critically acclaimed The N Word. He is editor-in-chief of The Crisis—the magazine of the NAACP—and former editor at and frequent contributor to the Washington Post, and his writing has appeared on Salon and in Essence, the Los Angeles Times, and other publications. He divides his time between Maryland and Illinois with his wife and five children.