Stasiland: Stories from Behind the Berlin Wall (Paperback) 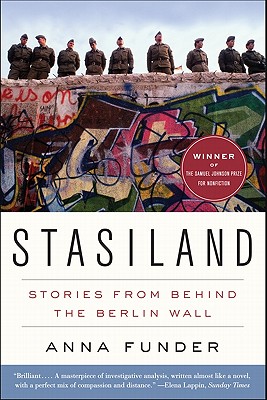 Winner of the Samuel Johnson Prize for Non-Fiction: a powerfully moving account of people who heroically resisted the communist dictatorship of East Germany, and of people who worked for its secret police, the Stasi.

Anna Funder delivers a prize-winning and powerfully rendered account of the resistance against East Germany’s communist dictatorship in these harrowing, personal tales of life behind the Iron Curtain—and, especially, of life under the iron fist of the Stasi, East Germany’s brutal state security force. In thetradition of Frederick Taylor’s The Berlin Wall and Philip Gourevitch’s We Wish to Inform You That Tomorrow We Will be Killed With Our Families, Funder’s Stasiland is a masterpiece of investigative reporting, written with novelistic vividness and the compelling intensity of a universal, real-life story.

Anna Funder's international bestseller, Stasiland, won the Samuel Johnson Prize for nonfiction. Her debut novel, All That I Am, has won many prizes, including the prestigious Miles Franklin Literary Award. Anna Funder lives in Brooklyn, New York, with her husband and children.

“Anna Funder’s Stasiland demonstrates that great, original reporting is still possible. She found her subject in East Germany, went for it bravely and delivers the goods in a heartbreaking, beautifully written book. A classic for sure.” — Claire Tomalin, Guardian Books of the Year

“Seduced and repelled by the mythical lost world of Cold War Berlin, Anna Funder reconstructs it by visiting its torture chambers and meeting its citizens. A gripping account of a city’s search for identity under the unexpected burden of freedom” — Scotland on Sunday

“A brilliant account of the brutal histories of people whose lives were shaped by the Berlin Wall.” — Sunday Times (London)

“A brilliant and necessary book about oppression and history. . . . It both devastates and lifts the heart. Here is someone who knows how to tell the truth.” — Rachel Cusk, Evening Standard “Books of the Year”

“A fascinating book. . .written with rare, literary flair. I can think of no better introduction to the brutal reality of East German repression.” — Sunday Telegraph

“Brilliantly illustrates the weird, horrifying, viciously cruel place that was Cold War East Germany…As well as the horror, Funder writes superbly of the absurdities of the Stasi.” — Evening Standard

“Stasiland takes us on a grim journey into a country in which the ratio of watchers to watched was even higher than that of the Soviets under communism.” — The Times (London)

“In a well-researched, personalized account Funder. . .sets out to explore and explain eastern Germany as it is now. With the quick eye of a curious outsider she succeeds in teasing out personal accounts that offer a sometimes shocking, occasionally bizarre and often amusing portrayal of a place that, despite its undeniable achievements since 1989, is still something of a parallel world within united Germany.” — Financial Times

“Funder talks to cleaners, students and even former members of the Stasi to evoke the spirit of the bifurcated, extraordinarily modern city of Berlin.” — Marie Claire

“Funder brings home with chilling detail the sheer human wastefulness of a political system built on deception and betrayal. It’s a terrible story, but written with vivacity and wit.” — Daily Mail (London)

“Tells extraordinary tales of the country after the fall of the Berlin Wall. . . . She also writes superbly about what it is like to live in Berlin today.” — Sunday Telegraph