All That I Am: A Novel (Paperback) 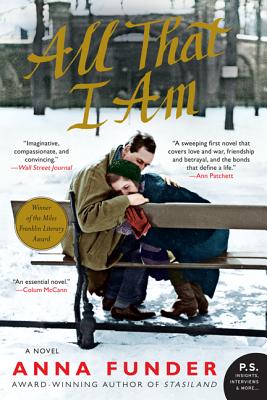 “Set in Germany and London before and after Hitler's rise to power, this book is written from the perspective of one the members of an underground resistance group in Germany fighting against the regime. A powerful look at the social life of pre-Hitler Germany, when 'speakeasy' bars, free love, and feminism were a part of the culture, is intertwined with the story of an intense attempt to inform the world of the coming horrors of Nazism. When the risk becomes too great for the resistors in Germany, they exile to London to continue their campaign. The cruelty and far-reaching arm of Hitler's supporters and the courage of the resistors stayed with me long after I finished this book.”
— Patricia Lyon-Surrey, Bear Pond Books of Montpelier, Montpelier, VT

Award-winning author Anna Funder delivers an affecting and beautifully evocative debut novel about a group of young German exiles who risk their lives to awaken the world to the terrifying threat of Hitler and Nazi Germany. Based on real-life events and people, All That I Am brings to light the heroic, tragic, and true story of a small group of left-wing German social activists who mounted a fierce and cunning resistance from their perilous London exile, in a novel that fans of Suite Francaise, The Piano Teacher, and Atonement will find irresistible and unforgettable.

“An intimate exploration of human connection and our responsibility to one another.” —Colum McCann, author of Let the Great World Spin

Anna Funder's international bestseller, Stasiland, won the Samuel Johnson Prize for nonfiction. Her debut novel, All That I Am, has won many prizes, including the prestigious Miles Franklin Literary Award. Anna Funder lives in Brooklyn, New York, with her husband and children.

“Funder writes with grace and conviction about the intrusion of the political on the domestic and the thrill of falling in love over a cause.” — New York Times Book Review

“In ALL THAT I AM, Anna Funder delivers a sweeping first novel that covers love and war, friendship and betrayal, and the bonds that define a life. It is a moving and ambitious work.” — Ann Patchett

“A literary work as suspenseful as the best thrillers, Funder’s extraordinary first novel is an unflinching portrait of courage in devastating circumstances.” — Library Journal

“A spiraling account of political activity and love…this beautiful tapestry of friendship and loyalty during one of history’s darker times will appeal to fans of novels about WWII.” — Library Journal

“History, like hope, is not something to be solved, but to be carried. Anna Funder has written an essential novel about how we carry the bricks of history on our backs…” — Colum McCann

“Absorbing debut novel…[Funder] adds an integral perspective on a shopworn subject by invoking the lives of Nazi dissidents whose attempts to alert the world to the growing menace were ignored until it was too late.” — Publishers Weekly

“Like Hillary Mantel’s brilliant WOLF HALL, Funder’s new book is not just a novel or thriller, and is also far more than mere history.” — Betsey Burton, The King's English Bookshop

“A bravura piece of storytelling-perfectly plotted, exactingly described…Funder has taken the raw material of truth and from it created a novel of real power and beauty.” — Daily Telegraph (London)

“The strengths of Funder’s writing are emotional and imaginative. In what she has to say about love, loss and betrayal there is profound truth.” — The Times (London)

“A remarkable story told with clarity and precision, along with moments of insight and literary grace.” — Rachel Cusk, The Guardian

“A strong and impressively humane novel…the subtlety of Anna Funder’s novel is in the elegance of her precise prose, and in her paintstaking portrait of an ordinary woman swept up in extraordinary events…” — Times Literary Supplement (London)

“A brilliant narrative…Every part beautifully rendered and balanced…it works as a gripping spy novel…Funder’s prose raises the book to a different level…This book is a wonder.” — The Spectator

“A seamless and powerful tale…Funder has successfully transformed the material into a narrative of individual endeavor and survival, which examines universal themes.” — The Independent on Sunday

“Imaginative, compassionate and convincing…In her first novel, Funder combines her proven gift for re-creating the past with the fiction writer’s license to reveal emotional truth through artifice.” — Wall Street Journal