It Happens in the Hamptons: A Novel (Paperback) 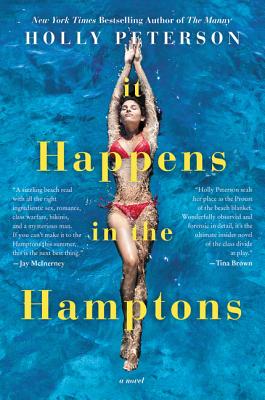 By Holly Peterson
$17.91
Not Available

In the Hamptons, everyday people are as complicated and fascinating as millionaires...

When Katie Doyle moves across the country to the Hamptons, she is hoping to find summer employment, new friends for her young son, and a chance to explore a new love affair with George, a dazzling investor. What she finds is a strange cocktail of classes, where society’s one-percenters vacation alongside local, hardworking people who’ve lived in the Hamptons for generations. Though she’s looking forward to her move, Katie is wary about mingling in her boyfriend’s East Coast elite circles. She soon discovers Southampton isn’t all that it seems to be on the surface—and neither are the people who live there.

As George takes Katie on a whirlwind tour of country clubs, haute couture, and lavish events, Katie is amazed to witness sudden whims becoming dire needs, extramarital affairs blossoming right and left, and people purchasing friends and loyalties like a pair of shoes. Even the middle-class townspeople maintain determined façades while maneuvering like sharks among the wealthy summer invaders.

The more Katie becomes immersed, the more she learns the stories of both the upstairs and downstairs, the upper crust and middle of the road. The combustion between classes becomes explosive as the summer tears on. Betrayals, a sexual predator, and a missing person lost in murky waves drive the reader on a racing Learjet through impossible twists and turns before landing at the shocking conclusion. When Katie meets Luke, a marine biologist and teacher, he makes her realize what it is she really wants, as she understands the life she’s begun for herself is built on shifting Hamptons’ dunes.

Holly Peterson is the author the May 2017 social satire fiction release, It Happens in the Hamptons. In 2016, she curated an outdoor cooking book, Assouline's Smoke and Fire: Recipes and Menus for Outdoor Entertaining. In 2014, she published The Idea of Him and of the New York Times bestseller The Manny in 2007.  She was a Contributing Editor for Newsweek, an Editor-at-Large for Talk magazine and an Emmy Award-winning Producer for ABC News, where she spent more than a decade covering everthing from trials of the century to global politics. Her writing has been published in the New York Times, Newsweek, Town and Country, The Daily Beast, Vogue, Harper's Bazaar, Elle Decor, Departures and numerous other publications.

“Hugely entertaining! Put Holly Peterson’s IT HAPPENS IN THE HAMPTONS on your list of guilty pleasures this summer.” — Elin Hilderbrand, New York Times bestselling author of The Identicals

“In this irresistible beach read, a single mom lured to the Hamptons for the summer learns the ways of the 1 percent of the 1 percent. Peterson chronicles this crowd with firsthand knowledge and a sense of the ridiculous. She’s like Edith Wharton in Gucci flip-flops.” — People

“With It Happens in the Hamptons, Holly Peterson seals her place as the Proust of the beach blanket. Wonderfully observed and forensic in detail, it’s the ultimate insider novel of the Hamptons class divide at play.” — Tina Brown

“It Happens in the Hamptons is an sizzling beach read with all the right ingredients: sex, romance, class warfare, bikinis, and a mysterious man. If you can’t make it to the Hamptons this summer, this is the next best thing.” — Jay McInerney, author of Bright Lights, Big City

“Readers will love the innocence of Katie and the way that Peterson has portrayed her in this novel. Many will love the scenic views of the Hamptons and the vivid descriptions of the hearts her acquaintances wear on their sleeve.” — RT Book Reviews

“It Happens in the Hamptons is an undeniably satisfying summer beach read... I couldn’t put it down. Holly Peterson has done a remarkable job bringing to life both summer society and surfer society, two worlds she also straddles in real life.” — Julia Reed