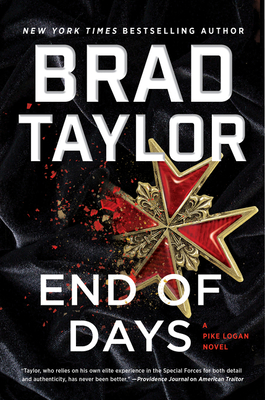 This is book number 16 in the Pike Logan series.

When a paragliding trip over the picturesque mountains of Switzerland results in the brutal murder of the former head of Israeli intelligence, Mossad brings in terrorist hunters Aaron and Shoshana to investigate. But they'll need help to find out who was behind the attack and what they’re planning next. Luckily, Aaron and Shoshana know exactly who to call.

Taskforce operators Pike Logan and Jennifer Cahill have been trapped in Charleston, South Carolina during COVID-19, so when Aaron and Shoshana show up on their doorstep with Israeli passports and a new mission, they jump at the chance to assist their friends. Some suspect that Keta’ib Hezbollah, an Iranian-funded militia group operating in Iraq, might be responsible for the “accidental” deaths of key members of the American and Israeli governments. But something isn’t adding up, and Pike, Jennifer, and the two Mossad operators are determined to find the real assassins before more people are cut down.

As they stumble upon the trail of a serial killer loose on the streets of Rome connected to the deaths and follow evidence leading to the exalted Knights of Malta, they must wade deep into the contentious religious and political fractures of Israel and the greater Middle East. It’s a dangerous world where fanatics and legitimate organizations exist side by side, and it’s up to the Taskforce to determine who is really pulling the strings. What they find could have disastrous consequences not only for them, but for the entire world…

Brad Taylor, Lieutenant Colonel (Ret.), is a twenty-one-year veteran of the U.S. Army Infantry and Special Forces, includ­ing eight years with Delta Force. Taylor retired in 2010 after serving more than two decades and participating in Oper­ation Enduring Freedom and Operation Iraqi Freedom. He has written fifteen New York Times bestsellers and is a security consultant on asymmetric threats for various agencies. He lives in Charleston, South Carolina, with his wife and two daughters.

“Taylor has fashioned a wondrously structured tale that’s complex without being confounding. Once deemed the heir apparent to W.E.B. Griffin, Taylor is now laying claim to being the American John le Carre, and his End of Days is a stunning triumph.”  — Providence Journal

“Pike Logan returns with a thundering force… Taylor’s own military experience and insights bleed onto the page, but in an honest and informative way that makes his story seem a little too real for comfort… Taylor [is] one of today’s finest storytellers.” — TheRealBookSpy.com on End of Days

“All action from start to finish…. Another solid novel in the series.” — RedCarpetCrash.com

“Taut . . . a memorable cast, powerful action scenes, and authentic tradecraft . . . Series fans will appreciate the continuing evolution of the characters and the customary attention to tactical detail. Taylor reinforces his place as a major player in the military action genre.” — Publishers Weekly on American Traitor

"American Traitor is frighteningly realistic and will cause a lot of sleepless nights in Washington. Brad Taylor is the best action writer in the business today, and Pike Logan is the right hero for our time."  — William H. McRaven, Adm, U.S. Navy (Ret.) and author of Make Your Bed

“It is [Taylor’s] remarkable character work with a robust and memorable cast that is the true strength of the novel. The camaraderie of the battle-hardened operators…, their staunch loyalty... and their stalwart sense of shared duty ultimately make for a big-hearted novel, even amid its many pulse-pounding moments.” — Charleston Post & Courier on American Traitor

“Taylor, who relies on his own elite experience in the Special Forces for both detail and authenticity, has never been better, and neither has his literary doppelganger, Pike Logan.” — Providence Journal on American Traitor

“Taylor, a retired Special Forces lieutenant colonel, has a good grasp of the geopolitical backdrop of his stories, and this knowledge gives his books a solid layer of plausibility. The high-energy writing also helps sell the story and characters. This is a series that has earned its popularity.” — Booklist on American Traitor

“Lose yourself in American Traitor and find yourself remembering what makes this country so great.” — Veteran News Reporter

“Another solid Pike Logan novel that is all action from the time they get down under.” — Red Carpet Crash

“Brad Taylor knows his stuff. His new Pike Logan novel, Hunter Killer, has the gun metal ring of authenticity and the crisp writing of a military communique… It makes you pause and think while you’re being thoroughly and rapidly entertained. It’s an excellent read, and I greatly enjoyed it.” — Nelson DeMille

“Taylor continues to tell flawless stories with his stellar cast of characters... It’s amazing that after so many novels Taylor can still maintain the high-level quality and breathless action readers expect, while also getting better with each tale.” — Booklist (starred review)

"Taylor brings an unquestionable level of authenticity to his Pike Logan series... Throw in some former Israeli Mossad agents and the cast of elite operators along with the level of bone-crushing violence is almost overflowing. A surefire hit for those who like contemporary foreign affairs spiced heavily with page-turning action." — Kirkus Reviews

“ A car bomb meant for Pike [sets] the enraged Pike off on an unauthorized mission of vengeance… Aaron and Shoshana Bergman… raise the excitement level as they wreak havoc. A big surprise on the last page will please series fans.” — Publishers Weekly

“In what can only be described as Brad Taylor’s best novel to date, Hunter Killer has upped the stakes…With non-stop action, a driven plot, politics, and death, Brad Taylor has delivered a must-read Pike Logan novel that will be one of the best thrillers of 2020.”  — Lima Charlie

“A blistering, explosive read… Hunter Killer is one of the best in the series to date… An intriguing tale, full of twists, turns, explosions and fisticuffs. By the book’s conclusion, you will be wondering why all thrillers can’t be this good.” — Bookreporter.com

“Brad Taylor has once again topped himself with this latest book. The action scenes are incredible… If you’re a fan of the action, thriller genre jump right in with this one.” — RedCarpetCrash.com

“[A] page-turning thriller...Taylor is one of today’s premiere authors writing about the world of special ops.” — Associated Press

“As usual in the Pike Logan series, the spycraft and related technology are fascinating, the dialogue crackles, and all the players are operating in an international sea of moral ambiguity. Recommend Pike Logan to readers who like their spies tough, smart, and bordering on superhuman.” — Booklist