Notes From the Bathroom Line: Humor, Art, and Low-grade Panic from 150 of the Funniest Women in Comedy (Hardcover) 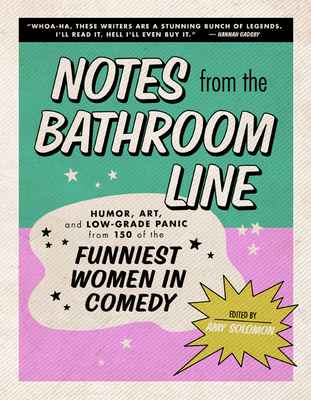 Hilarious humor pieces by some of the best female comedians around. My favorite ones are when they answer a simple question like “Describe your parents parenting style”. A lot of laugh out loud funny moments.

More than four decades ago, the groundbreaking book Titters: The First Collection of Humor by Women showcased the work of some of the leading female comedians of the 1970s like Gilda Radner, Candice Bergen, and Phyllis Diller. The book became an essential time capsule of an era, the first of its kind, that opened doors for many more funny women to smash the comedy glass-ceiling.

Today, brilliant women continue to push the boundaries of just how funny—and edgy—they can be in a field that has long been dominated by men. In Notes from the Bathroom Line, Amy Solomon brings together all-new material from some of the funniest women in show business today—award-winning writers, stand-up comedians, actresses, cartoonists, and more.

Notes from the Bathroom Line proves there are no limits to how funny, bad-ass, and revolutionary women can—and continue—to be.

Amy Solomon is a producer on HBO’s Silicon Valley and Barry. She currently runs Alec Berg’s production company, where she develops content for film and television. She lives in Los Angeles.

A reminder of the diversity that exists within the world of women in comedy...Solomon proves how an audiobook can be a portal away from the stresses of everyday life. — New York Times Book Review

... the funniest, best, and most important women in comedy of the here and now. Everything in Notes is funny. — Vulture

This diverse collection finds the funny in nearly every wacky situation ladies can find themselves in. A much-needed dose of delight. — Booklist

The beautiful thing about some books is their time-capsule quality, how they perfectly preserve a cultural moment between two covers. Amy Solomon has created just such a book with Notes From the Bathroom Line, an eclectic mix of writing, art and "low-grade panic," to quote the subtitle, from a large and rowdy cast of very funny women. — BookPage

Amy Solomon (of Barry and Silicon Valley) has assembled an all-star line-up of female comedians...everyone from Rachel Bloom to Cecily Strong to Beanie Feldstein to contribute to this funny, beautiful, important time capsule of our era. Read if you’re into: women in comedy, baby!  — HeyAlma.com

Speaking of funny women, they’re here. They’re real. And they’re funny in at least 150 different ways...[Notes] is a collection of heartfelt, silly, at times serious, and generally affirming pieces. — The Interrobang

Amy Solomon has amassed all-new material from, without a doubt, the funniest womxn in comedy today—award-winning writers, stand-up comedians, actresses, cartoonists, and more. Brilliant women have always, and will continue to, push the boundaries of just how funny—and edgy—they can be in a field that has long been dominated by men and Notes from the Bathroom Line is a testament to – and 250-page explosion of – their limitless talent. — Women Writers, Women's Books