A Study in Scarlet (Paperback) 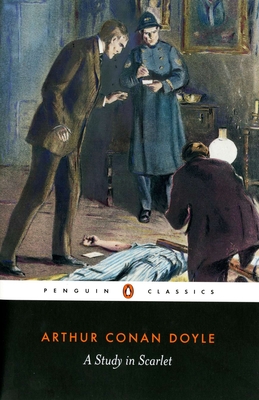 The first case of the celebrated Sherlock Holmes

In the debut of literature's most famous sleuth, a dead man is discovered in a bloodstained room in Brixton. The only clues are a wedding ring, a gold watch, a pocket edition of Boccaccio's Decameron, and a word scrawled in blood on the wall. With this investigation begins the partnership of Sherlock Holmes and Dr. Watson. Their search for the murderer uncovers a story of love and revenge-and heralds a franchise of detective mysteries starring the formidable Holmes.

For more than seventy years, Penguin has been the leading publisher of classic literature in the English-speaking world. With more than 1,700 titles, Penguin Classics represents a global bookshelf of the best works throughout history and across genres and disciplines. Readers trust the series to provide authoritative texts enhanced by introductions and notes by distinguished scholars and contemporary authors, as well as up-to-date translations by award-winning translators.

Arthur Conan Doyle (1859-1930) was born in Edinburgh and took a degree in medicine at Edinburgh University before becoming a doctor in Southsea. He began writing detective stories to supplement his income and 'A Study in Scarlet' (1887) introduced his finest creation, the hawk-eyed detective, Sherlock Holmes.

“[Holmes] is probably the only literary creation since the creations of Dickens which has really passed into the life and language of the people.”—G. K. Chesterton