Last Night in the OR: A Transplant Surgeon's Odyssey (Paperback) 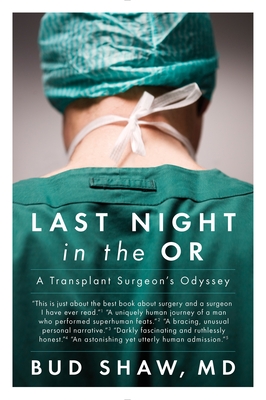 For readers of Henry Marsh's Do No Harm, Paul A. Ruggieri's Confessions of a Surgeon, and Atul Gawande's Better, a pioneering surgeon shares memories from a life in one of surgery’s most demanding fields

The 1980s marked a revolution in the field of organ transplants, and Bud Shaw, M.D., who studied under Tom Starzl in Pittsburgh, was on the front lines. Now retired from active practice, Dr. Shaw relays gripping moments of anguish and elation, frustration and reward, despair and hope in his struggle to save patients. He reveals harshly intimate moments of his medical career: telling a patient's husband that his wife has died during surgery; struggling to complete a twenty-hour operation as mental and physical exhaustion inch closer and closer; and flying to retrieve a donor organ while the patient waits in the operating room. Within these more emotionally charged vignettes are quieter ones, too, like growing up in rural Ohio, and being awakened late at night by footsteps in the hall as his father, also a surgeon, slipped out of the house to attend to a patient in the ER.

In the tradition of Mary Roach, Jerome Groopman, Eric Topol, and Atul Gawande, Last Night in the OR is an exhilarating, fast-paced, and beautifully written memoir, one that will captivate readers with its courage, intimacy, and honesty.

Bud Shaw grew up the oldest child of a general surgeon in rural south central Ohio. He graduated with an AB in Chemistry from Kenyon College in 1972 and received his MD degree from Case Western Reserve University School of Medicine in 1976. In 1981, he completed a surgery residency at the University of Utah, then trained in Pittsburgh under Tom Starzl, the father of liver transplantation. An internationally renowned transplant surgeon by age 35, Shaw left Pittsburgh in 1985 to start a new transplant program in Nebraska that quickly became one of the most respected transplant centers in the world. An author of 300 journal articles, 50 book chapters, and a founding editor of the prestigious journal, Liver Transplantation, he retired from active practice and the department chairmanship in 2009, and now focuses on writing, teaching and the value of narrative studies in medical education and clinical practice. His prize-winning essay, My Night With Ellen Hutchinson, published in Creative Nonfiction Magazine, was nominated for a 2013 Pushcart Prize and received Special Mention. The father of three adult children, Shaw lives with his wife, novelist Rebecca Rotert (Shaw) in the wooded hills north of Omaha, Nebraska.

“This is just about the best book about surgery and a surgeon I have ever read—by surgeon or civilian alike. It is warm, honest, straightforward, sad, amusing and compelling from beginning to end.”—Lee Gutkind

"Shaw's lean prose offers insights into medical professionals' private perspectives as well as a sobering sense of human fragility and the scientific strides taken to counter it. A bracing, unusual personal narrative that should appeal to aspiring physicians as well as to those considering the "big questions" around high-risk surgery."—Kirkus

“Dr. Shaw's memoir is a uniquely human journey of a man who performed superhuman feats.  His written candor made me (a surgeon as well) cry, laugh, recoil, cheer, and ponder life's true meaning.  I could not put this book down.”—Paul A. Ruggieri, M.D., author of Confessions of a Surgeon

“This darkly fascinating and ruthlessly honest memoir charts the highs and lows of a transplant surgeon’s life from bright-eyed junior to wise veteran with humor, intelligence and compassion.”—Wendy Moore, author of The Knife Man

“Bud Shaw's writing is scalpel sharp, close to the bone and true to the heart.”—Mark Vonnegut, author of The Eden Express and Just Like Someone Without Mental Illness Only More So

“Shaw wields the beauty of precision not only in the critically important operating room, but also in the crucial realm of literature… An emotionally generous tale.”—Biographile

“An eye-opening perspective on the human condition and an eloquent contribution to our dialogue about what care is, and why we should care.”—Janet Burroway, author of Raw Silk