The Shadow Cabinet (The Shades of London #3) (Paperback) 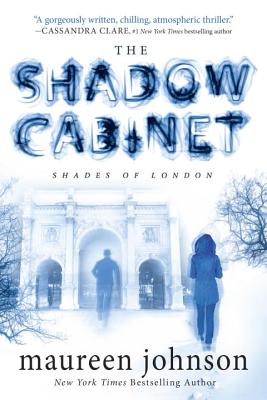 By Maureen Johnson
$12.31
Not Available

This is book number 3 in the The Shades of London series.

The thrilling third installment to the Edgar-nominated, bestselling series

Rory and her friends are reeling from a series of sudden and tragic events. While racked with grief, Rory tries to determine if she acted in time to save a member of the squad. If she did, how do you find a ghost? Also, Rory’s classmate Charlotte has been kidnapped by Jane and her nefarious organization. Evidence is uncovered of a forty-year-old cult, ten missing teenagers, and a likely mass murder. Everything indicates that Charlotte’s in danger, and it seems that something much bigger and much more terrible is coming.

Time is running out as Rory fights to find her friends and the ghost squad struggles to stop Jane from unleashing her spectral nightmare on the entire city. In the process, they’ll discover the existence of an organization that underpins London itself—and Rory will learn that someone she trusts has been keeping a tremendous secret.

Maureen Johnson (www.maureenjohnsonbooks.com) is the author of nine young adult novels, and is contributor to two short story collections, including the New York Times bestselling Let It Snow. Maureen lives in New York City. Follow her on Twitter @maureenjohnson.

Praise for Maureen Johnson’s The Shadow Cabinet:
A Spring 2015 Kids’ Indie Next Pick!

“Creepy, tense and wonderful: Don't expect to put this down once it's begun—but be sure to begin with The Name of the Star.”—Kirkus Reviews, starred review

“The plot…is among Johnson’s finest and incorporates creepy bits of backstory, fascinating historical asides, and truly ghoulish side characters.”—Booklist

“Heavily laced with humor and genuine creepiness, this well-crafted thriller is a winner.”—School Library Journal