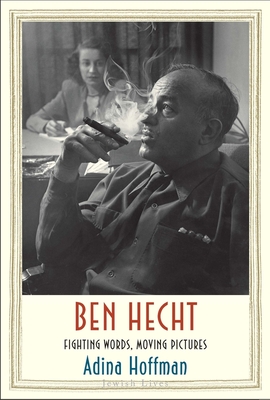 From the prizewinning Jewish Lives series, a vibrant portrait of Ben Hecht, one of the most accomplished and prolific American screenwriters

“To boil down such a profuse, not to say verbose, career, into so compact a volume was a challenge, but [Hoffman] has achieved much more than elegant concision. . . . She makes contact with a living personality, creating a portrait both sympathetic and clear-eyed.”—Geoffrey O'Brien, New York Review of Books

He was, according to Pauline Kael, “the greatest American screenwriter.” Jean-Luc Godard called him “a genius” who “invented 80 percent of what is used in Hollywood movies today.” Besides tossing off dozens of now-classic scripts—including Scarface,Twentieth Century, and Notorious—Ben Hecht was known in his day as ace reporter, celebrated playwright, taboo-busting novelist, and the most quick-witted of provocateurs. During World War II, he also emerged as an outspoken crusader for the imperiled Jews of Europe, and later he became a fierce propagandist for pre-1948 Palestine’s Jewish terrorist underground. Whatever the outrage he stirred, this self-declared “child of the century” came to embody much that defined America—especially Jewish America—in his time.

Hecht's fame has dimmed with the decades, but Adina Hoffman’s vivid portrait brings this charismatic and contradictory figure back to life on the page. Hecht was a renaissance man of dazzling sorts, and Hoffman—critically acclaimed biographer, former film critic, and eloquent commentator on Middle Eastern culture and politics—is uniquely suited to capture him in all his modes.

Jewish Lives is a prizewinning series of interpretative biography designed to explore the many facets of Jewish identity. Individual volumes illuminate the imprint of Jewish figures upon literature, religion, philosophy, politics, cultural and economic life, and the arts and sciences. Subjects are paired with authors to elicit lively, deeply informed books that explore the range and depth of the Jewish experience from antiquity to the present.

In 2014, the Jewish Book Council named Jewish Lives the winner of its Jewish Book of the Year Award, the first series ever to receive this award.

Adina Hoffman is an award-winning essayist and biographer. The author of four previous books, including Till We Have Built Jerusalem: Architects of a New City and My Happiness Bears No Relation to Happiness: A Poet’s Life in the Palestinian Century, she lives in Jerusalem and New Haven.

"Engrossing . . . Hecht . . . is due a revival, and this short, striking biography could provide it. Like him, it’s playful, punchy and moves at a real clip."—Ed Potton, The Times

"A screenwriter hoping to serve up a punchy opening scene could hardly do better than the first paragraph of Adina Hoffman's new biography of Ben Hecht . . . The opening credits have barely rolled (so to speak) and we already know that the book is a very unusual sort of Hollywood biography, one about a man who sought a role on the world stage that extended far beyond having written 'Scarface.' The story that Hoffman proceeds to tell—her account of what she vividly describes as Hecht's 'long, slaphappy career'—is little known today, a fact that would have surprised plenty of people when he died in 1964 . . . Sorting through [his] contradictions is . . . the task she sets for herself . . . It's a big job for such a slender book, but Hoffman . . . has the grip--the historical, cultural and human frame of reference--required to see Hecht whole."—Jeremy McCarter, Wall Street Journal

“Hecht’s life was extraordinary, his writing is (mostly) a tonic, his films are (in the main) dazzling, and Hoffman has brilliantly caught his restless, contradictory quality in crystalline prose. Her analysis of his Jewishness is nothing short of a revelation.”—Simon Callow, Sunday Times

"Sensitive and incisive. . . . To boil down such a profuse, not to say verbose, career, into so compact a volume was a challenge, but [Hoffman] has achieved much more than elegant concision. Alert to the wiles and intricacies of someone who savored his own contradictions, she makes contact with a living personality, creating a portrait both sympathetic and clear-eyed."—Geoffrey O'Brien, New York Review of Books

"[A] precise and lively portrait . . . Each phase in Hecht's adventures is electrifying . . . Hoffman's concentrated biography is smartly entertaining and revelatory."—Booklist (starred review)

“Lively, well-researched . . . A clear-eyed portrait of an impetuous and multi-talented man.”—Kirkus Reviews

“Splendid . . . Hoffman brings objectivity and an amused skepticism to her subject… [She] juggles Hecht’s contradictions as deftly as he juggled his many commitments. I closed the book thinking that his life would make one hell of a Hecht movie.”—Carrie Rickey, The Forward

"Hoffman’s profile of the staggeringly prolific Hecht is written with a dynamism and wit reflective of its subject."—Choice

“Ben Hecht and the American movie business grew up together, trading punches. Adina Hoffman captures this often destructive force of nature in all his cynicism and fervor, and is especially incisive dealing with his long struggle to find a Jewish identity that could fit his cantankerous personality. This book makes you wish you'd known the guy, if only to watch the sparks he threw off.”—John Sayles

“Thoroughly absorbing, compulsively readable, Adina Hoffman’s book gives a critical but sympathetic account of the pugnacious, brilliant Ben Hecht. A highly gifted storyteller, Hoffman shows just how important Hecht was in his day, and why he matters now.”—Noah Isenberg, author of We'll Always Have Casablanca