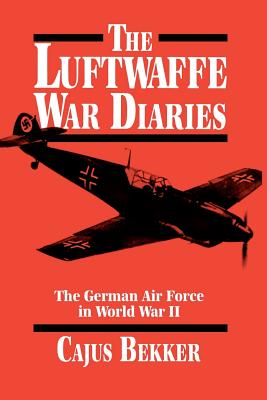 "A gripping, highly contentious account of the rise and fall of the German air force."--London Times

The Luftwaffe War Diaries is the definitive history of the German air force in World War II, from the blitzkrieg on Poland to the last desperate stand over Germany--the only account ever to come from a German source. Its masterfully organized chapters detail, summarize, and evaluate every important strategy and campaign. Cajus Bekker has drawn on official German archives and collections, the combat journals and personal papers of leading officers, and the collated Luftwaffe war diaries, none of which have been published outside Germany, as well as interviews with hundreds of former German airmen.
The result is a critical examination of the Luftwaffe's development and command against the vivid background of World War II's greatest air battles. While the author does full justice to the performance of German airmen, he does not embellish it. Thus his chronicle of the deadly struggle of these men is anything but a heroic saga; the exploits of the other side are treated with equal justice. Heroes and villains are not described or eulogized here--only men fighting a war that most of them did not want. With over 100 photographs, numerous maps, and a complete index of personalities, The Luftwaffe War Diaries brings into stunning focus for now and all time the ironic triumph and inevitable tragedy of war.

Cajus Bekker is the author of a number of contemporary documentary studies, including Hitler's Naval War and Eyes Through Night and Fog: The Story of Radar.