Is This the Real Life?: The Untold Story of Freddie Mercury and Queen (Paperback) 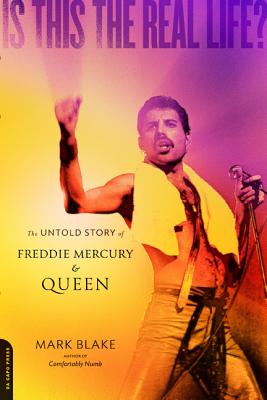 Queen's success in the 1970s was accompanied by a taste for musical and non-musical excess. Is This the Real Life? draws on eyewitness testimonies -- former producers and managers, ex-girlfriends and boyfriends -- to create a complete picture of one of the world's most ambitiously driven rock bands at work and at play. Revealing Queen's complex dynamic, Blake also explores how Freddie Mercury's sexuality alienated some of the band's fan base, how they reinvented themselves by morphing from hard rock to pop, and how they saw out their final years as Mercury became one of the most successful rock stars in the world.

Mark Blake is a former assistant editor of Q magazine, a long-time contributor to its sister titles MOJO and Planet Rock, and has written for Rolling Stone, the Times (London), Classic Rock, and the Daily Telegraph. He is the editor of two definitive music books, Dylan: Visions, Portraits & Back Pages and Punk: The Whole Story, and is the author of the Pink Floyd biography Comfortably Numb and the Queen biography Is This the Real Life? Blake lives in London with his wife and son.

"Return to those thrilling days of rock 'n' roll yesteryear with Blake's engrossing chronicle of talent and excess. It's another one of those books that inhales you...Thought it's over 400 pages, it's the kind of book you'll rip through in a day. It's a thoroughly enjoyable read."—Creative Loafing Blog

"If you're a Queen fan, don't hesitate to pick this one up...[and] if you have even a passing interest in the story you should give this a shot. You really won't be disappointed."—Examiner.com

"The most comprehensive bio to date about the over-the-top rockers...Blake's book effectively illuminates the band's story and music for both the casual fan and diehards."—Houston Press

"Is This The Real Life? uses interviews with the people who knew the band best to piece together a Behind the Music-style biography. It's extensive and detailed...It's a worthy read."—Instinct

"Blake manages to paint a far more detailed picture than some of his predecessors...Sparkling anecdotes throughout."—MOJO

"A happy medium between fact and anecdote. Real Life rounds out the band's history with plenty of ripe minutiae and lost details...[A] colorful account."—Under the Radar