Birth School Metallica Death: The Inside Story of Metallica (1981-1991) (Paperback) 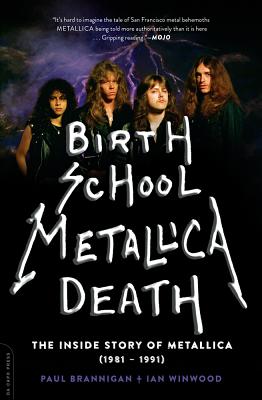 Birth School Metallica Death is the definitive story of the most significant rock band since Led Zeppelin, covering the band's formation up to their breakthrough eponymous fifth album, aka "The Black Album." The intense and sometimes fraught relationship between aloof-yet-simmering singer, chief lyricist, and rhythm guitarist James Hetfield and the outspoken and ambitious drummer Lars Ulrich is the saga's emotional core. Their earliest years saw the release of three unimpeachable classics (Kill 'Em All, Ride the Lightning, and Master of Puppets), but it was the breakthrough of ...And Justice for All that rent the fabric of the mainstream, hitting the top of the charts without benefit of radio airplay or the then-crucial presence on MTV. And in 1991, with the release of "The Black Album," Metallica finally hit the next level with five hit singles and their first album atop the Billboard charts.

Veteran music journalists and Metallica confidants Paul Brannigan and Ian Winwood detail this meteoric rise to international fame in an epic saga of family, community, self-belief, the pursuit of dreams, and music that rocks. Told through first-hand interviews with the band and those closest to them, the story of Metallica's rise to the mainstream has never been so vividly documented.

Paul Brannigan and Ian Winwood are two of the UK's foremost music writers. A contributor to Rolling Stone, Classic Rock, Q, and Metal Hammer magazines, Brannigan is the author of the acclaimed This Is a Call: The Life and Times of Dave Grohl, while Winwood has written for Rolling Stone, the Guardian, Mojo, Kerrang!, NME, and the BBC. Both reside in London.

“Brannigan and Winwood dig deep into the band members'' formative years…As former editor of Kerrang!, Britain's popular heavy metal magazine, Brannigan had the opportunity to interview a number of those in Metallica's orbit over the years, this special access and familiarity adds breadth to the book. This objective study is a refreshing approach to the traditional music biography. Even the most knowledgeable fans will eagerly await the second volume.”

“[An] ambitious undertaking…The authors' enthusiasm for their subject is infectious. They're well-placed to show how Metallica learned from their British New Wave of heavy-metal forebears and, in true Oedipal fashion, killed the fathers to create something new. For metal heads and most fans of hard rock.”

“It's hard to imagine the tale of San Francisco metal behemoths Metallica being told more authoritatively than it is here…Gripping reading.”

“Introduces us to the boys who went on to be metal kings…[Brannigan and Winwood] have worked closely with the band over the years, and it shows, both in the access they've gained, the anecdotes they witnessed first-hand and the warmth they afford their subjects. No stone is left unturned as the band's insane life is meticulously researched.”

“Roach shows how thoroughly she has researched her subject…while also giving modern readers something to think about in our own days of social and political witch hunts. Six Women of Salem…will provide a greater sense of the real-world lives of those who engaged in and were victimized by those events.”

“The Metallica story has been told many times before, but seldom as entertainingly or as smartly as this…Ian Winwood and Paul Brannigan's vivid prose makes this well-worn saga seem somehow fresh and fascinating again.”