The Time of My Life: A Righteous Brother's Memoir (Paperback) 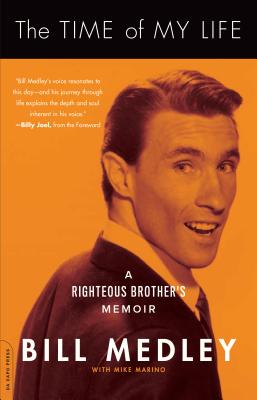 Bill Medley's indelible baritone adorns some of the biggest hits of the twentieth century and is prominent on the soundtrack of an entire generation. He and his musical partner, the late inimitable Bobby Hatfield, formed the Righteous Brothers in 1963 and forever changed the sound of popular music. The term "blue-eyed soul" was born.

After the Phil Spector-produced "You've Lost That Lovin' Feelin'" hit #1 in 1964 and Bobby Hatfield's sweeping solo vocal turn on "Unchained Melody" enchanted millions, the Righteous Brothers found themselves in the thick of the musical and cultural changes sweeping the nation. They toured with the Beatles and the Rolling Stones, became friends with Elvis Presley and the Beach Boys, and brought rhythm and blues to the largest crossover audience it had reached to date.

The Time of My Life is an affecting and vivid memoir of those times and beyond. But Medley's story isn't just about the #1 hits and the awards. It's the story of an immensely talented young guy who lived the rock star life and reached the pinnacle of fame, success, and excess, and how he was eventually able to renew his commitment to both his faith and his family.

Bill Medley, along with the other half of the Righteous Brothers, Bobby Hatfield, has recorded such hits as "(You're My) Soul and Inspiration" and "Rock and Roll Heaven." His worldwide #1 hit, "(I've Had) the Time of My Life," with Jennifer Warnes, earned him a Grammy, a Golden Globe, and an Academy Award. In 2003, Medley and Hatfield were inducted into the Rock and Roll Hall of Fame, and he continues to tour and perform to sold-out audiences everywhere. He lives in Southern California with his wife Paula.

Mike Marino is an author, speaker, and musician. He was a member of several popular music groups including the McCoys, famous for their #1 hit "Hang on Sloopy." He lives in Orange County, California.

"Bill Medley's voice resonates to this day—and his journey through life explains the depth and soul inherent in his voice."—Billy Joel, from the Foreword

"Medley tells about it all—the good times and the bad—in a fast-moving, at times very emotional memoir that pulls back the curtain to offer some interesting insights into the world of recorded music."—Buffalo News

ARSC Journal
“A smooth, enjoyable read, painting [Medley] as a genuinely warm, introspective guy. It's honest and forthright…Throughout, it's like Medley's affably telling you his amazing life story over a cold beer.”

Internet Review of Books, 11/10/15
“A conversational and easily readable story…The Time Of My Life adds to the archives of music history and should be on the shelves of Righteous Brothers fans and anyone else interested in the music of the period.”

Portland Book Review, 12/2/15
“An easy read, and worth the price of admission for its stories.”