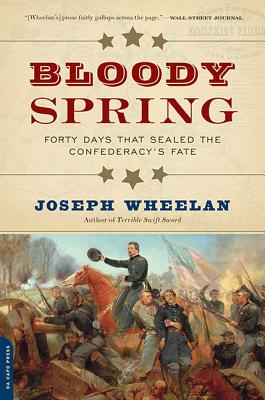 For forty crucial days they fought a bloody struggle. When it was over, the Civil War's tide had turned.

In the spring of 1864, Virginia remained unbroken, its armies having repelled Northern armies for more than two years. Robert E. Lee's Army of Northern Virginia had defeated the campaigns of four Union generals, and Lee's veterans were confident they could crush the Union offensive this spring, too. But their adversary in 1864 was a different kind of Union commander -- Ulysses S. Grant. The new Union general-in-chief had never lost a major battle while leading armies in the West. A quiet, rumpled man of simple tastes and a bulldog's determination, Grant would lead the Army of the Potomac in its quest to destroy Lee's army.

During six weeks in May and June 1864, Grant's army campaigned as no Union army ever had. During nearly continual combat operations, the Army of the Potomac battered its way through Virginia, skirting Richmond and crossing the James River on one of the longest pontoon bridges ever built. No campaign in North American history was as bloody as the Overland Campaign. When it ended outside Petersburg, more than 100,000 men had been killed, wounded, or captured on battlefields in the Wilderness, near Spotsylvania Court House, and at Cold Harbor. Although Grant's casualties were nearly twice Lee's, the Union could replace its losses. The Confederacy could not.

Lee's army continued to fight brilliant defensive battles, but it never mounted another major offensive. Grant's spring 1864 campaign had tipped the scales permanently in the Union's favor. The war's denouement came less than a year later with Lee's surrender at Appomattox Court House.

Joseph Wheelan is the author of nine previous books, including the highly-acclaimed books Terrible Swift Sword and Midnight in the Pacific. Before turning to writing books full time, Wheelan was a reporter and editor for the Associated Press for twenty-four years. He lives in Cary, North Carolina.

Kirkus Reviews
“Well-researched and argued—a text that Civil War scholars and buffs will consume with glee.”

Civil War Roundtable of Washington, DC
“In clear, concise, journalistic prose, filled with energetic verbs and colorful adjectives, Wheelan vividly recreates those critical days that permanently turned the tide of the war in the East. [The author's] rock-solid research and instructive anecdotes put events and personalities into a context that brings clarity to the bloodiest spring of the war.”

Blue & Gray Magazine, Vol. XXXI, #6
“The writing is crisp and flows; the narrative is detailed…A good introductory volume to the six weeks that were the beginning of the end of the Confederacy.”