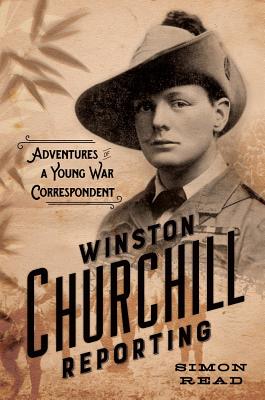 Long before his finest hour as Britain's wartime leader, Winston Churchill emerged on the world stage as a brazen foreign correspondent, covering wars of empire in Cuba, India, the Sudan, and South Africa.

In those far-flung corners of the world, reporting from the front lines between 1895 and 1900, Churchill mastered his celebrated command of language and formed strong opinions about war. He thought little of his own personal safety, so convinced was he of his destiny, jumping at any chance to be where bullets flew and canons roared. "I have faith in my star that I am intended to do something in the world," he wrote to his mother at the age of twenty-three before heading into battle.

Based on his private letters and war reportage, Winston Churchill Reporting intertwines young Winston's daring exploits in combat, adventures in distant corners of the globe, and rise as a major literary talent experiences that shaped the world leader he was to become.

Simon Read is the author of eight previous works of nonfiction published on both sides of the Atlantic. His writing has appeared in the San Francisco Chronicle, Publisher's Weekly, and Time. Three of his previous books, including Winston Churchill Reporting, have been optioned for movie and television adaptation. He lives in Phoenix, Arizona.

"A well-written popular history. Read has done a good job of presenting Churchill's earlier career and putting it in a clear narrative form. For those who do not know his backstory, this book helps explain how Churchill managed to be at the right place at the right time in 1940."

"Of all the books about Winston Churchill, this is the first dedicated to his years as a war correspondent...Read introduces this work with 'Winston Churchill as Indiana Jones,' a line that becomes reality within the first few pages...A worthy purchase for fans of Churchill who are unfamiliar with these stories as well as those interested in late 19th-century history, military history, and a case study of writing as a journalist."—Library Journal

"In this edge-of-your-seat, slice-of-life biography, author Simon Read skillfully weaves Churchill's earliest wartime adventures with his lively reporting from the battlefield...Not to miss!"—Examiner.com

"Churchill is an enthralling subject, and the few years covered in the narrative are filled with danger, courage, conflict, death and deliverance...Churchill was in the epicenter of history, and readers will devour this delicious narrative about the young rising star."—San Diego Book Review

"With material from personal letters as well as his reports from the front, Winston Churchill Reporting is a visit with a future leader during his formative years. It's an extraordinary, eye-opening book."—January Magazine

"Those who simply cannot get enough of all things Churchillian will find themselves entertained by Simon Read's exploration of the courageous (and foolhardy) adventures (and antics) of a headstrong and supremely self-confident Winston Churchill in his 20s...A fast-paced, novelistic book that provides...a great deal of intriguingly detailed material on where he went and what he did in his youth that would, in the main, serve him and his nation extraordinarily well in the years to come."—InfoDad blog

"Read draws from private letters and papers relating the combat experiences that helped shape Churchill into an exemplary statesman. The narrative is more an adventure tale than a straight biography."—Military History

"An absorbing book that fairly illustrates the means by which a green subaltern of the 19th century at length became one of the towering figures of the 20th."—Roanoke Times

"Investigates how Churchill went from a young army officer cadet to being Britain's highest-earning war correspondent by the age of 25, getting the journalism bug for the rest of his life...Tell[s] the tale of Churchill the adventurer...elegantly."—The Economist

"The true-life story of a lesser-known period in the life of British statesman Winston Churchill...Extensively researched, rich in detail, and enhanced with notes, a bibliography, and an index, Winston Churchill Reporting is worthy of the highest recommendation for public and college library biography collections."—Midwest Book Review

"I have read several books about Churchill and thought this book would be a rehash. I was so wrong. I learned a great deal about a courageous, pushy young man who was becoming a writer."—Internet Review of Books

"A cracking narrative...This is not just a gripping account of the adventures of a young soldier who could never decide whether he was an army officer or a war correspondent (nor could higher authority). It brings into focus some of the themes which were to dominate Churchill's career. Above all, it is a study in courage...A rollicking read, it is an ideal Christmas present for anyone interested in war, history, Britain and greatness."—CapX

"An absolutely rollicking adventure...Read's fast-paced book makes Winston Churchill's story accessible to many new readers...An insightful look at what motivated one of the most prominent men of the 20th century...Read nails it with a book that is just such good fun."—Centre Write (Bright Blue UK)

"Churchill's formative days in India as a young soldier-war correspondent-cum-polo player [are] so utterly fascinating and revealing, especially as his tales of derring-do have been projected in breathless prose in Simon Read's recently published Winston Churchill Reporting."—Calcutta Telegraph

"A book that covers the great man's adventurous early life."—MoneyWeek

"One of the only books (out of nearly 700 books about Churchill) dedicated to that period of his life. Rather than a general overview of his experiences, it is a detailed recounting of the events using his own writings as well as a plethora of contemporaneous sources of those individuals who were also present. The writing brings to life what he experienced and his behavior...This book provides the reader with a sense of the core of this man and of the impact these events had upon him."—Portland Book Review

"Churchill's copy from the war zone electrified London and author Read makes the most of it to spin an exciting tale...This is a gripping story, easy to read in the style of a mystery thriller...thoroughly researched and fully annotated with endnotes."—Buffalo News

"Explores a fascinating lesser known part of Churchill's life that significantly shaped the future leader he was to become."—San Francisco Book Review

"People tend to forget that Winston Churchill spent several years in his youth writing about wars in Cuba, India, the Sudan, and South Africa. If you need reminding, check out Winston Churchill Reporting. It hadn't occurred to me until I read this book that his war correspondence brought him his first success in life, after years of being criticized by his father and others."—Tom Ricks, Foreign Policy

"By taking the reader back to a time before Churchill became famous and successful, the author shows a young man with all his dreams and desires before him. He shows what is perhaps the most formative time in the future Prime Minister's life and explains how his experiences contributed to the traits he later exhibited leading Great Britain during its greatest test of survival."—Military Heritage

"[A] lively, action-packed account...Read conveys it all through the unusual style of an action novel instead of the usual academic history book, a gutsy move that could've badly backfired on him; but in this case it works perfectly...A lively and incredibly fast-paced book, this will be a revelation to people...who only knew Churchill as the balding, stogie-chewing curmudgeon of 1940s fame...Strongly recommended."—Chicago Center for Literature and Photography

"Read offers what he describes as neither history or biography, but a mixture of both. It is a very good mixture."—Albert Mohler

"Simon Read writes excellently about the various adventures that Churchill went on as he developed two careers in parallel-one in the British Army and one as a writer on the side...Worth reading for any Churchillian...Insight into a young man on the move who had grand plans."—Anglotopia