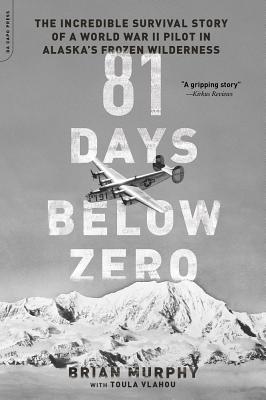 "A riveting...saga of survival against formidable odds" (Washington Post) about one man who survived a World War II plane crash in Alaska's harsh Yukon territory
Shortly before Christmas in 1943, five Army aviators left Alaska's Ladd Field on a routine flight to test their hastily retrofitted B-24 Liberator in harsh winter conditions. The mission ended in a crash that claimed all but one-Leon Crane, a city kid from Philadelphia with no wilderness experience. With little more than a parachute for cover and an old Boy Scout knife in his pocket, Crane found himself alone in subzero temperatures. 81 Days Below Zero recounts, for the first time, the full story of Crane's remarkable twelve-week saga.

Brian Murphy is a journalist at the Washington Post. He joined the paper after more than twenty years as an award-winning foreign correspondent and bureau chief for the Associated Press in Europe and the Middle East. He has three previous books, including 81 Days Below Zero, and currently lives in Washington with his wife Toula Vlahou.

"A solid entry in the perennially popular canon of real-life adventure stories."
—Booklist

"A riveting tale of survival."
—BookPage

"This would be a great read at the beach on a hot summer day...An interesting sage of survival against formidable odds."
—Washington Post

"[An] excellent volume...Murphy crafted a volume that is superbly written, thoroughly researched, and is unique within this popular genre. Crane's incredible story of survival deserves to be known by a far greater audience. That is why 81 Days Below Zero is such a valuable contribution."
—Military Review

"[A] thrilling true story...Many have been the tales of man against nature, the struggle for survival among icy peaks in a howling wilderness--some fictitious (Jack London's "To Build a Fire"), others far too true ("Alive"). Few if any have chronicled such an epic battle as this, the journey of a lone airman from near death to life, in the course of which might be seen a series of miracles, fortified by his indomitable will to survive...It is a well-told tale."
—Roanoke Times

"A primer for anyone looking for information on extreme weather survival."
—New York Journal of Books

"Leon Crane's amazing story is recounted in great detail. The author relates the young aviator's harrowing tale in smooth prose, which beckons the reader to continue reading. There are many survival stories of airmen and sailors adrift at sea and how they beat the odds. This story reveals how one flyer endured an experience just as extreme and lived to tell about it."
—World War II History Magazine

"[Murphy] manages to transport the reader to a cold and isolated arctic landscape through vivid descriptions...A satisfying read for military aviation buffs and anyone with an interest in Alaska history during the war years."
—Alaska History

"An epic tale and one that will hold the attention of anyone interested in Alaska, World War II history, survival, or operations in the extreme cold...This story's value lies in giving us an understanding of how it is possible to survive in the harshest conditions on almost nothing but wits, guts and determination."
—Association of the United States Army

"This is a well written book which should be of interest to anyone who likes aviation history, survival stories and the will to live when confronted with seemingly impossible odds."
—Military magazine

"An exciting, caring, and interesting story."
—Portland Review of Books

"[A] sharply detailed, gripping account...The reader shivers with Crane as he ponders each next step through a desolate Alaskan forest when a warm day during the winter of 1943 is zero degrees Fahrenheit...A fresh, vivid, film-worthy tale of World War II survival."
—Charleston Post and Courier

"Gripping...Murphy perfectly captures Crane's predicament of trying to survive in some of the most brutal terrain and weather on the planet...This book is an epic story of one man's will to survive in a harsh environment."
—Collected Miscellany