Midnight in the Pacific: Guadalcanal -- The World War II Battle That Turned the Tide of War (Hardcover) 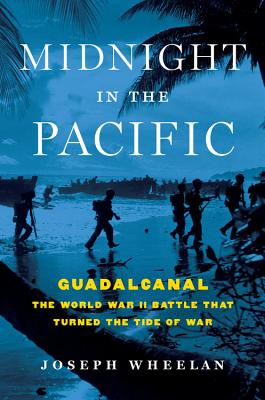 From early August until mid-November of 1942, US Marines, sailors, and pilots struggled for dominance against an implacable enemy: Japanese soldiers, inculcated with the bushido tradition of death before dishonor, avatars of bayonet combat -- close-up, personal, and gruesome. The glittering prize was Henderson Airfield. Japanese planners knew that if they neutralized the airfield, the battle was won. So did the Marines who stubbornly defended it.

The outcome of the long slugfest remained in doubt under the pressure of repeated Japanese air, land, and sea operations. And losses were heavy. At sea, in a half-dozen fiery combats, the US Navy fought the Imperial Japanese Navy to a draw, but at a cost of more than 4,500 sailors. More American sailors died in these battles off Guadalcanal than in all previous US wars, and each side lost 24 warships. On land, more than 1,500 soldiers and Marines died, and the air war claimed more than 500 US planes. Japan's losses on the island were equally devastating -- starving Japanese soldiers called it "the island of death."

But when the attritional struggle ended, American Marines, sailors, and airmen had halted the Japanese juggernaut that for five years had whirled through Asia and the Pacific. Guadalcanal was America's first major ground victory against Japan and, most importantly, the Pacific War's turning point.

Published on the 75th anniversary of the battle and utilizing vivid accounts written by the combatants at Guadalcanal, along with Marine Corps and Army archives and oral histories, Midnight in the Pacific is both a sweeping narrative and a compelling drama of individual Marines, soldiers, and sailors caught in the crosshairs of history.

Joseph Wheelan is the author of nine previous books, including the highly-acclaimed books Terrible Swift Sword and Midnight in the Pacific. Before turning to writing books full time, Wheelan was a reporter and editor for the Associated Press for twenty-four years. He lives in Cary, North Carolina.

"Current-day readers, accustomed to an era of perpetual war with no end in sight, will find this expert, nuts-and-bolts history of a famous victory thoroughly satisfying."
—Kirkus

"[Wheelan] does an excellent job of highlighting the desperate fighting on all fronts."—New York Journal of Books

"Written with scholarly precision, yet thoroughly accessible to readers of all backgrounds."—Midwest Book Review

"Highly readable and provides a comprehensive examination of America's first offensive operation in World War II. This would be an excellent addition to the library of any historian or student with an interest on the subject."—Army University Press

"An entertaining, fast-paced, adventure wrapped in stories of valor, horror and survival while remaining a necessary contribution to the history of Guadalcanal."
—WW2 Reads

"Midnight in the Pacific brings to life the qualities of those who endured one of the critical struggles of World War II...Wheelan delivers the story in meticulously researched, chilling, riveting, and often gruesome detail...It will not only captivate those with a serious interest in the Pacific War, but it will also intrigue and inform a much broader audience."—Marine Corps Gazette

"Midnight in the Pacific is a highly detailed account of the battle for Guadalcanal that those with a love of military history are sure to enjoy."—On Point: The Journal of Army History

"An impressive chronicle of one of the critical campaigns of the war."—WWII History