My Damage: The Story of a Punk Rock Survivor (Paperback) 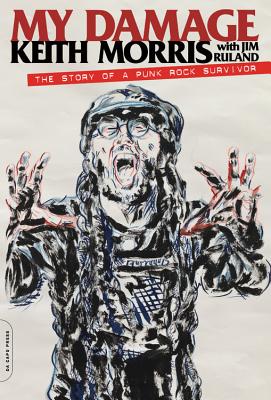 Keith Morris is a true punk icon. No one else embodies the sound of Southern Californian hardcore the way he does. With his waist-length dreadlocks and snarling vocals, Morris is known the world over for his take-no-prisoners approach on the stage and his integrity off of it. Over the course of his forty-year career with Black Flag, the Circle Jerks, and OFF!, he's battled diabetes, drug and alcohol addiction, and the record industry . . . and he's still going strong.

My Damage is more than a book about the highs and lows of a punk rock legend. It's a story from the perspective of someone who has shared the stage with just about every major figure in the music industry and has appeared in cult films like The Decline of Western Civilization and Repo Man. A true Hollywood tale from an L.A. native, My Damage reveals the story of Morris's streets, his scene, and his music-as only he can tell it.

Keith Morris is a cofounding member of Black Flag and the Circle Jerks. He has recorded over fifteen albums, appeared on countless albums and compilations, and has a half-dozen film credits to his name.

Jim Ruland has been writing for punk rock zines like Flipside since the early '90s and has written for every issue of Razorcake, America's only non-profit independent music fanzine.

"My Damage is characterized by sharp wit, abundant empathy, and the wisdom of a man who has outrun his many demons."--MOJO


"A winning memoir from a punk icon"--A.V. Club


"A portrait of a famed frontman that is complex but earnest"--PunkNews.org


"An insightful and expansive look at an unconventional life"—Men's Journal, 10/27/1

"A wild tell-all told in a no-holds-barred style, My Damage is an epic autobiography told with humor, honesty, and courage."
—The Good Men Project, 11/15/16

"Morris' book benefits from the same energetic, frenetically authentic style that makes his music so memorable. His description of the early punk scene and the inception of his two most famous bands is a fascinating read."—Under the Radar, 11/18/16

"[My Damage] delivers the behind-the-scenes kind of stuff we all love reading in rock autobiographies."
—No Echo