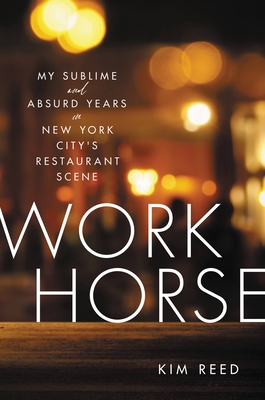 A razor-sharp look at one woman’s nearly two decades in the New York City restaurant, including her time working with Joe Bastianich, and what happens when your job consumes your life.
​

By day, Kim Reed was a social worker to the homebound elderly in Brooklyn Heights. By night, she scrambled into Manhattan to hostess at Babbo, where even the Pope would have had trouble scoring a reservation, and A-list celebrities squeezed through the jam-packed entryway like everyone else. Despite her whirlwind fifteen-hour workdays, Kim remained up to her eyeballs in grad school debt. Her training—problem solving, crisis intervention, dealing with unpredictable people and random situations—made her the ideal assistant for the volatile Joe Bastianich, a hard-partying, “What's next?” food and wine entrepreneur. He rose to fame in Italy as a TV star while Kim planned parties, fielded calls, and negotiated deals from two phones on the go.

Decadent food, summers in Milan, and a reservation racket that paid in designer bags and champagne were fun only inasmuch as they filled the void left by being always on call and on edge. In a blink, the years passed, and one day Kim looked up and realized that everything she wanted beyond her job—friends, a relationship, a family, a weekend without twenty ominous emails dropping into her inbox—was out of reach. Workhorse is a deep-dive into coming of age in the chaos of New York City’s foodie craze and an all-too-relatable look at what happens when your job takes over your identity, and when a scandal upends your understanding of where you work and what you do.. After spending years making the impossible possible for someone else, Kim realized she had to do the same for herself.

Kim Reed was born in 1978 and grew up along the East Coast. She has a BA from Siena College and an MSW from New York University. Before her work as an executive assistant, Kim practiced social work in New York City for nearly a decade. Workhorse is her first book.

“Workhorse is a riveting behind-the-scenes look at a famous restaurant empire, and also the story of a young woman struggling to forge an identity for herself inside that seductive, stultifying workplace, and ultimately, beyond it.  Kim Reed has definitely discovered her second act as a gifted storyteller.”
—Jay McInerney, author of Bright Lights, Big City

“Kim Reed spills the funniest, most raw and honest truth: you can have the Foo Fighters’ manager on speed dial, spend your days at an Italian castle built for a prince, and still not have it mean anything at all when you come home to an empty bed after fifteen-hour days. Workhorse is a whirlwind look at the glitz and grind of the lowest rungs on the corporate ladder, and what happens when you realize you need to get out.”
—Cat Marnell, New York Times bestselling author of How to Murder Your Life

“Workhorse is dynamite. Reading Kim Reed’s story was like taking a knife through the foot—a combination of excruciating pain and unbridled exhilaration. From the musty basements to the sleek office spaces to the cramped hustle on the floor of a popular West Village restaurant to the snow-crinkled traipsings around town, even down to taking the Q home to Park Slope, this is a hyper-realistic portrait of New York City restaurant life in the aughts.”

"The candor of this memoir is just one sign of Reed's personal transformation—a long, painful coming-of-age that led her to confront and break patterns that could have made her miserable for the rest of her life. A generously detailed, juicy restaurant industry tell-all and a cautionary tale for young workaholics."—Kirkus Reviews

"Reed’s matter-of-fact memoir features tempting sides of Italian food, fashion, and wine. Her
book’s main course is not only the ride-or-die job; it’s also a meditation on approaching midlife
and the need for true friendship and love."—Booklist

“Those who are fascinated by extreme subcultures, the business of restaurants and the life of executive assistants will find Workhorse a worthwhile read."—Inside Higher Ed