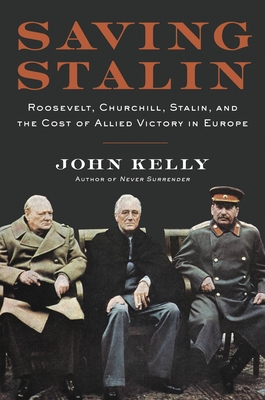 During World War II, the Allied leaders banded together, forged a great victory--and created a new and dangerous post-war world.
In the summer of 1941, Harry Hopkins, Franklin Roosevelt's trusted advisor, arrived in Moscow to assess whether the US should send aid to Russia as it had to Britain. Unofficially, he was there to determine whether Josef Stalin--the man who had killed over six million Ukrainians during the 1930s--was worth saving.
In this riveting and sweeping narrative, author John Kelly chronicles the turbulent wartime relationship between the great leaders--Roosevelt, Churchill, and Stalin--and military commanders of America, Britain, and the Soviet Union. Faced with the greatest challenge of the century, the Allied leaders and their war managers struggled against a common enemy--and each other. The story behind how victory was forged is an epic story, rich in drama, passion and larger-than-life personalities. The Allies eventually triumphed, but at what cost?
Using his trademark character-rich writing style and focusing on unique, unknown, and unexplored aspects of the story, Kelly offers a fresh perspective on the decision-making that changed the course of the war--and the course of history.
Saving Stalin brings to vivid life the epic story of the century's greatest human catastrophe. It is an unforgettable master work in historical narrative.

John Kelly is the author of the highly praised bestseller The Great Mortality, about the Black Death of 1348, and the acclaimed The Graves Are Walking, about the Irish famine of the mid-nineteenth century, as well as Never Surrender, his praised previous book about the beginning of World War II. He has written extensively about medicine, history, and psychology. He lives in New York City.

"John Kelly is a master at bringing historical figures to life, and in Saving Stalin he has the most compelling cast of the twentieth century. Of all the evocative details, I'll never forget Stalin scratching out a doodle of wolves roaming the tundra whenever he felt nervous."—David Maraniss, Pulitzer Prize-winning author of A Good American Family: The Red Scare and My Father

"Earlier John Kelly wrote about the first days of World War II. Now he writes about its end--and about the making of the post-war world. This is narrative history at its finest."—John M. Barry, #1 New York Times bestselling author of The Great Influenza

"A vivid look at the relationship between Allied leaders of Britain, the United States and the Soviet Union... from the author of the highly acclaimed book The Great Mortality, about the Black Death of 1348."—New York Post, selected as one of the Best Books of the Fall

"Historian Kelly offers a solid look at the evolving relationships among FDR, Churchill, and Stalin that led to their cooperation to defeat Germany in WW II,... details the high level discussions among Allied leaders,... and is particularly good at conveying how victory over Hitler was far from inevitable. [Saving Stalin offers] a firm grasp of the histories and personalities involved."—Publishers Weekly

“John Kelly, who has previously written narrative histories of the Black Death, the Irish famine, and the early stages of the Second World War, engagingly revisits the turbulent and often strained relationships between the U.S., Britain, and Soviet Russia in their war against Nazi Germany and her Axis partners in his new book Saving Stalin.”
—Francis P. Sempa, New York Journal of Books

“This well researched history tracks the course of World War II ... and details the ebb and flow in relations among Stalin, FDR, Churchill and other allies. Saving Stalin offers a thoughtful analysis of the compromises leaders made to win a war. It covers in great detail Operation Overlord, which Stalin had been pushing for and Churchill wanted control over....John Kelly chronicles the turbulent wartime relationship between Britain, America and the Soviet Union with a unique focus on the unknown and unexplored aspects of the story.”—BookReporter