Bring It On Home: Peter Grant, Led Zeppelin, and Beyond -- The Story of Rock's Greatest Manager (Hardcover) 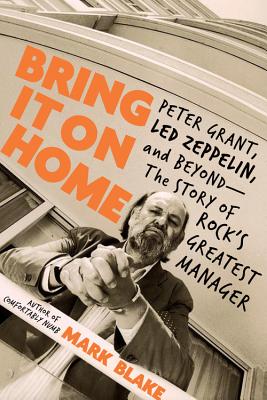 The authorized biography of the most notorious rock manager of all time, Peter Grant, best known for his work with Led Zeppelin

Peter Grant is the most famous music manager of all time. Often acknowledged as the "fifth member of Led Zeppelin," Grant's story has appeared in fragments across countless Zeppelin biographies, but none has explored who this brilliant and intuitive manager yet flawed and sometimes dangerous man truly was. No one has successfully captured the scope of his personality or his long-lasting impact on the music business. Acclaimed author and journalist Mark Blake seeks to rectify that.

Bring It On Home is the first book to tell the complete uncensored story of this industry giant. With support from Grant's family interviews with Led Zeppelin's surviving band members, and access to Grant's extensive archive and scores of unpublished material, including his never-before-published final interview, Blake sheds new light on the history of Led Zeppelin and on the wider story of rock music in the 1960s and '70s.

Full of new insights into Grant's early life as an actor, wrestler, and road manager for rock 'n' roll pioneers Chuck Berry and Little Richard; the formation of Led Zeppelin; his seclusion following the demise of the band; and his recovery from substance abuse, Bring It On Home reveals a man who, after the extraordinary highs and lows of a career in rock 'n' roll, found peace and happiness in a more ordinary life. It is a celebration, a cautionary tale, and a compelling human drama.

Mark Blake is a former assistant editor of Q magazine, a long-time contributor to its sister titles MOJO and Planet Rock, and has written for Rolling Stone, the Times (London), Classic Rock, and the Daily Telegraph. He is the editor of two definitive music books, Dylan: Visions, Portraits & Back Pages and Punk: The Whole Story, and is the author of the Pink Floyd biography Comfortably Numb and the Queen biography Is This the Real Life? Blake lives in London with his wife and son.

"An entertaining biography of Led Zeppelin's
man-mountain of a manager [which] reveals an intriguing, ultimately tragic
figure."—The Guardian

"An excellent book and one of the rare biographies of
a manager that's as interesting as the band they represented."—The Rock and Roll Chemist

"A tale as expansive and complex as the man himself."—Mojo

"To say BRING IT ON HOME is a rambunctious page-turner is an understatement; but despite all the violence and weirdness, you can't help liking the 'real' Peter Grant who emerges here."—Planet Rock

"There are many entertaining stories in the book. Many
will even be new to fans of Led Zeppelin who have read existing accounts of the
band's career... Peter Grant played as large a role in making Led Zeppelin a
success as any of its band members, and Blake's book is an excellent depiction
of his life."—Led Zeppelin News

"[Peter Grant] has largely been chronicled as an addendum to the larger Zep story, but here music journo Mark Blake... makes Peter Grant the center of his own story. Which, ultimately, both surprises the reader with new things and confirms opinions already held... In the end, Bring It On Home both bolsters and fleshes out the 'Peter Grant' of lore with the Peter Grant of reality."—Houston Press

"Bring It On Home is an entertaining look at a supporting figure from rock's glory years."—Shepherd Express

"Blake sheds new light on the history of Led Zeppelin and on the wider story of rock music in the 1960s and '70s... Bring It On Home reveals a man who, after the extraordinary highs and lows of a career in rock 'n' roll, found peace and happiness in a more ordinary life. It is a celebration, a cautionary tale, and a compelling human drama."—BraveWords