The Iron Sea: How the Allies Hunted and Destroyed Hitler's Warships (Hardcover) 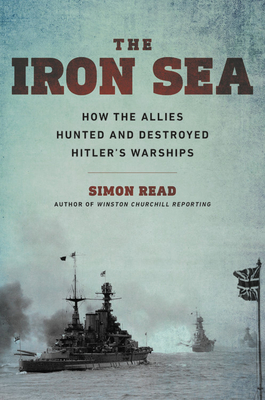 From the acclaimed military history author, this action-packed World War II history describes the Allies' brutal naval engagements and daring harbor raids to destroy the backbone of Hitler's surface fleet.
The sea had become a mass grave by 1941 as Hitler's four capital warships -- Scharnhorst, Gneisenau, Tirpitz, and Bismarck, the largest warship on the ocean -- roamed the wind-swept waves, threatening the Allied war effort and sending thousands of men to the icy depths of the North Atlantic. Bristling with guns and steeled in heavy armor, these reapers of the sea could outrun and outgun any battleship in the Allied arsenal. The deadly menace kept Winston Churchill awake at night; he deemed them "targets of supreme consequence."
The campaign against Hitler's surface fleet would continue into the dying days of World War II and involve everything from massive warships engaged in bloody, fire-drenched battle to daring commando raids in German occupied harbors. This is the fast-paced story of the Allied bomber crews, brave sailors, and bold commandoes who "sunk the Bismarck" and won a hard-fought victory over Hitler's iron sea.
Using official war diaries, combat reports, eyewitness accounts and personal letters, Simon Read brings the action and adventure to vivid life. The result is an enthralling and gripping story of the Allied heroes who fought on a watery battlefield.

Simon Read is the author of eight previous works of nonfiction published on both sides of the Atlantic. His writing has appeared in the San Francisco Chronicle, Publisher's Weekly, and Time. Three of his previous books, including Winston Churchill Reporting, have been optioned for movie and television adaptation. He lives in Phoenix, Arizona.

"Simon Read's The Iron Sea is a wonderful, rip-roaring account of one of the greatest hunts in history - the pursuit of Hitler's warships. You'll feel the lash of salt spray, the thunder of depth charges, the immense tension of the chase. A superb addition to the annals of naval WWII history."—Alex Kershaw, New York Times bestselling author of The Liberator and The Longest Winter

"Prepare to journey back in time to the perilous early years of the Second World War, where Britain's lifelines depended on the destruction of four mighty German surface ships. Simon Read brilliantly retells the stories of the hunt for Hitler's warships in a single volume, which is crisply researched and brimming with vivid prose."—Patrick K. O'Donnell, bestselling author of Washington's Immortals and The Unknowns

"Winston Churchill's greatest fear in World War II was of losing the battle of the Atlantic and Britain being starved into surrender. I felt tingles down my spine when I read of the feats of so very many ordinary men and women from so many walks of life who sank Hitler's battle fleet, and stopped that from happening.... Read's Iron Sea, with its scholarly research and scintillating prose style, will leave you full of pride for that extraordinary generation and their staggering achievement."—Andrew Roberts, award-winning and bestselling author of Churchill: Walking with Destiny

"In The Iron Sea Simon Read brings readers straight into the heart of the tumultuous battle to control the Atlantic. Swarms of dive-bombers, lines of torpedoes cutting through inky black waters, the shrill cries of officers and sailors, the plumes of smoke and fire--all come viscerally to life in this narrative thriller."—Neal Bascomb, New York Times bestselling author of The Winter Fortress and Faster

"A vivid and detailed analysis... The fast-paced narrative draws on a solid foundation of primary sources and moves easily from meta-themes of strategy to the experiences of the sailors and airmen of Allied and Axis powers... an engaging history recommended for all U.S. history and WWII collections"—Library Journal

“In The Iron Sea, Simon Read takes readers into true stories of anti-Nazi swashbuckling adventure . . . It’s well worth the read. An enjoyable testimony, the Iron Sea will appeal to military history readers, both expert and casual. It reminds us that the defeat of this greatest threat to humanity was not easily won.”—Washington Examiner

“In prose both gripping and stylish, Simon Read captures the feverish intent on both sides to lay claim to the Atlantic, a battle that sent thousands to their icy deaths and lasted almost throughout the war.”—Air Mail Weekly

"The Iron Sea puts the reader right at the heart of events. Whether it is the flier in the belly of an RAF bomber braving flak over Kiel, the commando plunged into the horrific violence of Operation Chariot, or the sailor on the salt-crusted deck of a destroyer in the North Atlantic, The Iron Sea gives a no-punches-pulled account of what it was like to be there."—Aspects of History