This Is Not Fame: A "From What I Re-Memoir" (Paperback) 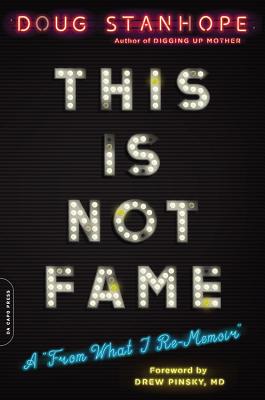 An unfiltered, unapologetic, hilarious, and sometimes obscene assemblage of tales from the down-and-dirty traveling comedy circuit

Doug Stanhope has been drunkenly stumbling down the back roads and dark alleys of stand-up comedy for over a quarter of a century, roads laden with dank bars, prostitutes, cheap drugs, farm animals, evil dwarfs, public nudity, menacing third-world police, psychotic breaks, sex offenders, and some understandable suicides. You know, just for levity.

While other comedians were seeking fame, Stanhope was seeking immediate gratification, dark spectacle, or sometimes just his pants. Not to say he hasn't rubbed elbows with fame. He's crashed its party, snorted its coke, and jumped into its pool naked, literally and often repeatedly -- all while artfully dodging fame himself.

Doug spares no legally permissible detail, and his stories couldn't be told any other way. They're weird, uncomfortable, gross, disturbing, and fucking funny.

This Is Not Fame is by no means a story of overcoming a life of excess, immorality, and reckless buffoonery. It's an outright celebration of it. For Stanhope, the party goes on.

Doug Stanhope is a veteran of over twenty-five years of stand-up comedy who has successfully dodged mainstream fame using his uncompromising brand of humor to build a cult-like following around the world. He tours extensively and has recorded over a dozen comedy specials. Stanhope resides in the US border town of Bisbee, Arizona, with pets who have people names, in an absurd relationship with his gal pal Bingo.