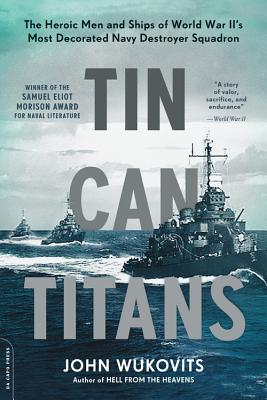 An epic narrative of World War II naval action that brings to life the sailors and exploits of the war's most decorated destroyer squadron.
When Admiral William Halsey selected Destroyer Squadron 21 (Desron 21) to lead his victorious ships into Tokyo Bay to accept the Japanese surrender, it was the most battle-hardened US naval squadron of the war.
But it was not the squadron of ships that had accumulated such an inspiring resume; it was the people serving aboard them. Sailors, not metallic superstructures and hulls, had won the battles and become the stuff of legend. Men like Commander Donald MacDonald, skipper of the USS O'Bannon, who became the most decorated naval officer of the Pacific war; Lieutenant Hugh Barr Miller, who survived his ship's sinking and waged a one-man battle against the enemy while stranded on a Japanese-occupied island; and Doctor Dow "Doc" Ransom, the beloved physician of the USS La Vallette, who combined a mixture of humor and medical expertise to treat his patients at sea, epitomize the sacrifices made by all the men and women of World War II.
Through diaries, personal interviews with survivors, and letters written to and by the crews during the war, preeminent historian of the Pacific theater John Wukovits brings to life the human story of the squadron that bested the Japanese in the Pacific and helped take the war to Tokyo.

John Wukovits is a military expert specializing in the Pacific theater of World War II. He is the author of many books, including Tin Can Titans, Hell from the Heavens, For Crew and Country, One Square Mile of Hell, and Pacific Alamo. He has also written numerous articles for such publications as WWII History, Naval History, and World War II. He lives in Michigan.

"Wukovits certainly joins [Samuel Eliot] Morrison and James D. Hornfischer as one of the pre-eminent writers on the history of U.S. Navy operations in the Pacific theater...Thanks should go not only to those veterans who want their story told before they're gone but as well to those like John Wukovits who do the telling in a well presented and poignantly human written manner."—New York Journal of Books

"Authors such as John Wukovits do all of us a great service by researching the lives of ships and sailors, and putting these stirring tales before a public often far too ignorant of their heritage...A well-researched, well-written and well-edited book, sure to stir the imaginations of many veterans, and well worth the time of adventure-loving civilians." —Roanoke Times

"The strength of Tin Can Titans is that Mr. Wukovits has ferreted out deeply personal stories of the officers and enlisted men who experienced hell aboard these destroyers. Their diaries, letters and personal reminiscences, as well as the action reports from their commanders, convey the horrors of pitching decks, exploding shrapnel and gut-wrenching fear." —Walter Borneman, Wall Street Journal

"An inspiring story of courage, duty, sacrifice, and devotion to country in the most trying and dangerous of circumstances. It's an epic story about decisive actions in a large Pacific war. But it's mostly a story about American sailors at war...most of them civilians who donned uniforms for the duration when their country needed them, and who went back, those who survived, to their civilian lives when the shooting stopped...Destroyers were workhorses in the Pacific, and elsewhere. It's right that their story is told too, as it is so well in Tin Can Titans. These are ships and Americans that should not be forgotten."—The American Spectator

"[Wukovits] draws overdue attention to the heroism, dedication, and courage of the young destroyer sailors...[He] does a masterful job capturing the day-to-day boredom, excitement, and fear ordinary tin can sailors experienced on routine patrols at the height of the Pacific war. He expertly weaves together monthly war diaries, action reports, and ships' histories, as well as interviews and oral histories from the officers and sailors that lived, fought, and often died together...Wukovits makes no claim that DesRon 21 single-handedly won the war, but he gives the men that fought in the squadron their due."—America in WWII

"Tin Can Titans is history with humanity, and should be of interest to any current student of Americana, and to any of the fading generations who still have close ties to our last great war."
—Curled Up with a Good Book

"A story of valor, sacrifice, and endurance and one that is well told...The author is a well-known military historian with vast experience on the Pacific war, and this expertise shines through in his latest book...The clear writing and thorough research combine to make a readable and enjoyable volume."—WWII History

"[Wukovits] interviewed former squadron members and mined the letters and diaries of the crews to present the Pacific War through their eyes."—Seapower

"A lively and briskly written account of destroyer squadron operations...Anyone interested in destroyer operations in general or those of the USN in particular will find this title worth consideration."—Warship International

"An excellent narrative of the blue-collar destroyers...Wukovits keeps the reader engaged with interesting stories and nonstop action."
—Collected Miscellany

"Using many primary sources as well as interviews with surviving destroyer crewmen, the author strips away the idealized image of serving aboard destroyers during the most intense naval war in history...A remarkable example of popular naval history...Tin Can Titans belongs on the bookshelf of every general or specialist reader interested in the Pacific War."
—Michigan War Studies Review