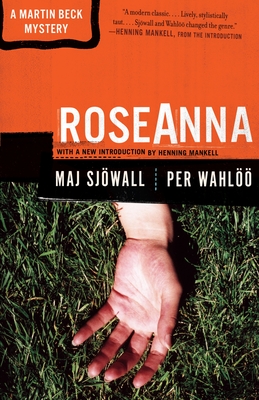 By Maj Sjowall, Per Wahloo, Henning Mankell (Introduction by)
$17.00

This is book number 1 in the Martin Beck Police Mystery Series series.

With a New Introduction by Henning Mankell. The masterful first novel in the Martin Beck series of mysteries by the internationally renowned crime writing duo Maj Sjöwall and Per Wahlöö ("the best writers of police procedurals in the world"), finds Beck hunting for the murderer of a lonely traveler.
On a July afternoon, a young woman's body is dredged from Sweden's beautiful Lake Vattern. With no clues Beck begins an investigation not only to uncover a murderer but also to discover who the victim was. Three months later, all Beck knows is that her name was Roseanna and that she could have been strangled by any one of eighty-five people on a cruise. As the melancholic Beck narrows the list of suspects, he is drawn increasingly to the enigma of the victim, a free-spirited traveler with a penchant for casual sex, and to the psychopathology of a murderer with a distinctive--indeed, terrifying--sense of propriety.

Maj Sjöwall and Per Wahlöö, her husband and coauthor, wrote ten Martin Beck mysteries. They plotted and researched each book together then wrote alternate chapters. The books were written over a ten year period and carefully planned to allow for gradual character development and evolving social commentary as the series continued. Mr Wahloo, who died in 1975, was a reporter for several Swedish newspapers and magazines and wrote numerous radio and television plays, film scripts, short stories, and novels. Maj Sjöwall is also a poet.

"A wonderfully tough and pleasantly chilling tale . . . told without a wasted word."—Harper's

"One of the most authentic, gripping and profound collections of police procedurals ever accomplished."—Michael Connelly

“Sjöwall and Wahlöö are the best writers of police procedural in the world.”—Birmingham Post