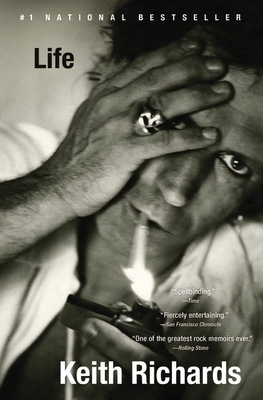 The long-awaited autobiography of Keith Richards, guitarist, songwriter, singer, and founding member of the Rolling Stones.

With The Rolling Stones, Keith Richards created the songs that roused the world, and he lived the original rock and roll life.

Now, at last, the man himself tells his story of life in the crossfire hurricane. Listening obsessively to Chuck Berry and Muddy Waters records, learning guitar and forming a band with Mick Jagger and Brian Jones. The Rolling Stones's first fame and the notorious drug busts that led to his enduring image as an outlaw folk hero. Creating immortal riffs like the ones in "Jumping Jack Flash" and "Honky Tonk Women." His relationship with Anita Pallenberg and the death of Brian Jones. Tax exile in France, wildfire tours of the U.S., isolation and addiction. Falling in love with Patti Hansen. Estrangement from Jagger and subsequent reconciliation. Marriage, family, solo albums and Xpensive Winos, and the road that goes on forever.

With his trademark disarming honesty, Keith Richard brings us the story of a life we have all longed to know more of, unfettered, fearless, and true.

Keith Richards was born in London in 1943. A guitarist, vocalist, songwriter, and cofounder of the Rolling Stones, he has also released solo albums with his band, The X-Pensive Winos. He lives in Connecticut with his wife, Patti Hansen.

James Fox was born in Washington, D.C., in 1945 and has known Keith Richards since the early 1970's when he was a journalist for the Sunday Times in London. His books include the international bestseller White Mischief. He lives in London with his wife and sons.

"[A] high-def, high-velocity portrait of the era when rock 'n' roll came of age, a raw report from deep inside the counterculture maelstrom of how that music swept like a tsunami over Britain and the United States....Mr. Richards has found a way to channel to the reader his own avidity, his own deep soul hunger for music and to make us feel the connections that bind one generation of musicians to another. Along the way he even manages to communicate something of that magic, electromagnetic experience of playing on stage with his mates, be it in a little club or a huge stadium."—Michiko Kakutani, The New York Times

"[A] slurry romp through the life of a man who knew every pleasure, denied himself nothing, and never paid the price."—David Remnick, The New Yorker

"What kind of celebrity autobiography is his Life? A remarkable one."—Jim Fusilli, The Wall Street Journal

"[Richards] not only has the best tunes, he also knows how to tell the best tales."—Clark Collis, Entertainment Weekly

"A vivid self-portrait and, of the Stones and their musical era, a grand group portrait....spellbinding storytelling."—Richard Corliss, Time