Back to Blood: A Novel (Paperback) 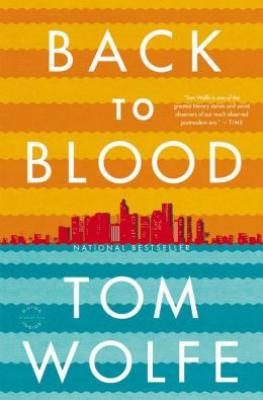 Tom Wolfe is back! If you're traveling to South Beach or just looking to get in the Miami state of mind this is a the perfect adventure for your trip. Modern Art, murder, and an introspective look at immigrant society has never been this fun.

A big, panoramic story of the new America, as told by our master chronicler of the way we live now.

Based on the same sort of detailed, on-scene, high-energy reporting that powered Tom Wolfe's previous bestselling novels, Back to Blood is another brilliant, spot-on, scrupulous, and often hilarious reckoning with our times.

Tom Wolfe is the author of more than a dozen books, among them The Electric Kool-Aid Acid Test, The Right Stuff, The Bonfire of the Vanities, A Man in Full, I Am Charlotte Simmons, and Back to Blood. A native of Richmond, Virginia, he earned his B.A. at Washington and Lee University and a Ph.D. in American Studies at Yale. He received the National Book Foundation's 2010 Medal for Distinguished Contribution to American Letters. He lives in New York City.

"A superb human comedy and the first novel ever to get contemporary New York, in all its arrogance and shame and heterogeneity and insularity, exactly right."—Washington Post Book World

"The novel contains passages as powerful and as beautiful as anything written--not merely by contemporary American novelists but by any American novelist....The book is as funny as anything Wolfe has ever written; at the same time it is also deeply, strangely affecting."—New York Times Book Review

"Wolfe is one of the greatest literary stylists and social observers of our much observed postmodern era....A rich, wise, absorbing, and irresistible novel."—Lev Grossman, Time

"Wolfe's dialogue is some of the finest in literature, not just fast but deep. He hears the cacophony of our modern lives."—Los Angeles Times