How to Roast a Lamb: New Greek Classic Cooking (Hardcover) 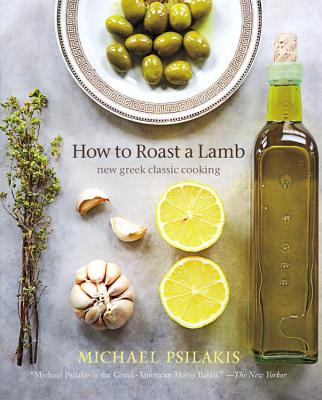 By Michael Psilakis, Barbara Kafka (Foreword by)
$39.20
Not Available

A rising star in the food world, Michael Psilakis is co-owner of a growing empire of modern Mediterranean restaurants, and one of the most exciting young chefs in America today.

In How to Roast a Lamb, the self-taught chef offers recipes from his restaurants and his home in this, his much-anticipated first cookbook.Ten chapters provide colorful and heartfelt personal essays that lead into thematically related recipes. Gorgeous color photography accompanies many of the recipes throughout.Psilakis's cooking utilizes the fresh, naturally healthful ingredients of the Mediterranean augmented by techniques that define New American cuisine.

Home cooks who have gravitated toward Italian cookbooks for the simple, user-friendly dishes, satisfying flavors, and comfortable, family-oriented meals, will welcome Psilakis's approach to Greek food, which is similarly healthful, affordable, and satisfying to share any night of the week.

Michael Psilakis is responsible for putting Modern Greek cuisine on the culinary map. Psilakis has earned many of the food world's highest honors including Chef of the Year from Bon Appétit and Esquire, a Michelin star, and a James Beard Award nomination. He owns Kefi, Fishtag, and MP Taverna in New York.

Barbara Kafka is the author of Vegetable Love, Roasting: A Simple Art, Party Food, Soup: A Way of Life, and the New York Times bestseller Microwave Gourmet. Vegetable Love was winner of the 2006 IACP award for Best Single Subject Cookbook. She has been a regular contributor to the New York Times and has written extensively for food magazines in the United States, Great Britain, and Australia, and was recently honored with the James Beard Foundation lifetime achievement award. She lives in New York and Vermont.

Michael has single-handedly transformed the Western idea of Greek food as we know it. He deserves every bit of the attention he's gotten. The future is his.—Anthony Bourdain

Anyone who reads this book-a delight of love and memory-will have a treasure trove of excellent and original recipes.—Barbara Kafka, author of Vegetable Love, from the Foreword

Be seduced by chef Michael Psilakis, passionate son and champion of Greece. Fired by his philosophy of kefi-the transcendence of celebration-he has forever changed our experience of Greek cooking.—Gael Greene, InsatiableCritic.com

Here's a Greek cookbook as warm and welcoming as the Greeks themselves...filled with wonderful family stories, rewarding insights, and, last but not least, utterly delicious recipes. Bravo!—Paula Wolfert, author of Mediterranean Clay Pot Cooking, Mediterranean Grains and Greens, and The Slow Mediterranean Kitchen

Michael Psilakis is a true original. While respecting the savory traditions of Greek cookery, he has been able to refine it into a modern global cuisine. How to Roast a Lamb gives the home cook every indication of just how wonderful Greek-American food can be.—John Mariani, Esquire food and travel columnist and author of The Encyclopedia of American Food & Drink