Black and Blue: Sandy Koufax, the Robinson Boys, and the World Series That Stunned America (Paperback) 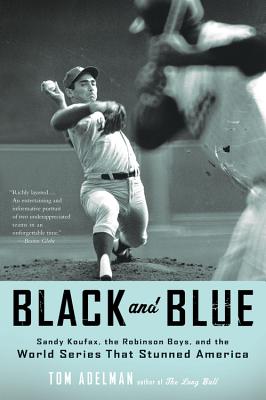 Baltimore 1966. Suffering through a summer of heated racial animosity, baseball fans look hungrily to the Orioles to bring new respect to their once-great city. Their young team of no-name kids and promising prospects appears to have been strengthened by the recent addition of veteran slugger Frank Robinson - but the former National League MVP is bad news (it is rumored), washed up and unreliable.

To lay these rumors to rest, Robby must play harder than he's ever played before. In his first year in the league, against unfamiliar pitchers in new ballparks, he resoundingly proves his worth -- to his city, his team, and himself -- by delivering a Triple Crown performance. Aided by a hilarious and memorable cast of characters -- the gentlemanly southerner Brooks Robinson and the wickedly inventive prankster Moe Drabowsky, a pitching staff of unknown kids like Jim Palmer and Dave McNally, and a gargantuan yet nimble fielder called Boog" -- Frank Robinson delivers his new team to its first World Series. But before they take it all, the Orioles must unseat the reigning champion Los Angeles Dodgers.

With America's cities in mounting turmoil, Los Angeles seems like another world altogether, a sunny land of surfers and movie stars. Comfortably dwelling in this higher plane is pitching ace Sandy Koufax, arguably the greatest lefthander in baseball history, behind whom the Dodgers have won two of the previous three World Series, replacing the Yankees as the sport's dominant team. Though battling agonizing arthritis throughout the season, the godlike Koufax has nonetheless persevered to win twenty-seven games in 1966, a personal best. Few outside Baltimore give the Orioles more than a fighting chance against such series veterans as Koufax, Don Drysdale, Maury Wills, Tommy Davis, and the rest. Experts are betting that the Dodgers can sweep it in four.

"What transpires instead astonishes the nation, as the greatest pitching performance in World Series history is capped by a redemption beyond imagining." -- Book Jacket

Tom Adelman is the author of the national bestseller The Long Ball. He has also written several novels and works of music criticism. Adelman and his family live in Princeton, New Jersey.