In His Own Words (Paperback) 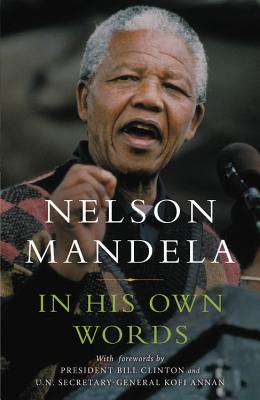 In spreading the message of freedom, equality, and human dignity, Nelson Mandela helped transform not only his own nation, but the entire world. Now his most important speeches are collected in a single volume. From the eve of his imprisonment to his release twenty-seven years later, from his acceptance of the Nobel Peace Prize to his election as South Africa's first black president, these speeches span some of the most pivotal moments of Mandela's life and his country's history.

Arranged thematically and accompanied by tributes from leading world figures, Mandela's addresses memorably illustrate his lasting commitment to freedom and reconciliation, democracy and development, culture and diversity, and international peace and well-being. The extraordinary power of this volume is in the moving words and intimate tone of Mandela himself, one of the most courageous and articulate men of our time.

"There is no easy way to walk to freedom anywhere, and many of us will have to pass through the valley of the shadow of death again and again before we reach the mountain tops of our desires." -- Nelson Mandela, September 1953

Nelson Mandela was a recipient of the Nobel Peace Prize, president of South Africa, president of the African National Congress, and leader of the anti-apartheid movement.