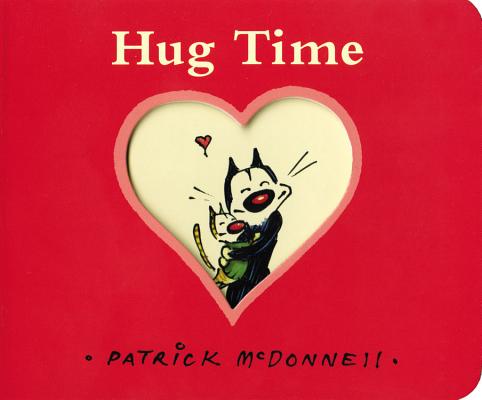 “When you open this book with the cut-out heart, you'll fall in love. Jules the kitten loves the whole world and sets out to hug everyone in it -- such a big project for such a little kitten! Hugging his best friends goodbye and armed with his long, long list -- he hugs all the birds in the park, a giant blue whale, a brand new frog, hippos, wombats, and more -- Jules is busy until he arrives at the empty North Pole with no one to hug. But wait! Here comes a happy polar bear who hugs Jules! This is a perfect gift to share with all you love!”
— Marilyn Smith, Kepler's Books & Magazine, Menlo Park, CA

There was once a kitten so filled with love he wanted to give the whole world a hug! Jules the kitten (also known in the MUTTS cartoons as "Shtinky Puddin'") knows that hugs can make the world a better place. So he makes a "Hug To-Do List"--with the endangered species of the world at the top--and travels the globe to show all of the animals that someone cares. From Africa to the North Pole to his own back yard, Jules proves a hug is the simplest--but kindest--gift we can give. With its gently environmental theme, this joyous rhyming story about sharing love is an ideal gift year-round.

Patrick McDonnell is the author and illustrator of Tek: The Modern Cave Boy, Thank You and Good Night, A Perfectly Messed-Up Story, The Monsters' Monster, and Me...Jane, a Caldecott Honor Book. He is also the creator of the internationally syndicated comic strip Mutts, which inspired his picture books The Gift of Nothing, Hug Time, and others. He lives in New Jersey.

Praise for The Gift of Nothing:

"A perfect meditation on gift giving and friendship."—Kirkus


*"Give this book an F, yes, an F: for fun and funny."
—Kirkus Reviews, starred review

*"Touches of wit and plenty of zip recommend this for lap-sit sharing."
—The Horn Book, starred review