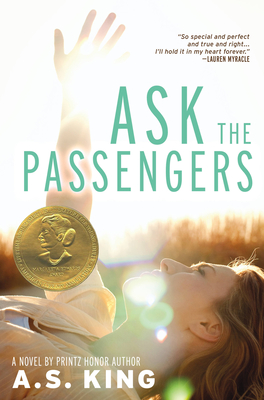 “This touching, challenging story about a small-town girl struggling to be honest with herself while she has to keep secrets from everyone around her is as finely wrought as any of King's previous award-winning novels.”
— Todd A. Dickinson, Aaron's Books, Lititz, PA

In this truly original portrayal of a girl struggling to break free of society's definitions, Printz Honor author A.S. King asks readers to question everything--and offers hope to those who will never stop seeking real love.
Astrid Jones desperately wants to confide in someone, but her mother's pushiness and her father's lack of interest tell her they're the last people she can trust. Instead, Astrid spends hours lying on the backyard picnic table watching airplanes fly overhead. She doesn't know the passengers inside, but they're the only people who won't judge her when she asks them her most personal questions...like what it means that she's falling in love with a girl.
As her secret relationship becomes more intense and her friends demand answers, Astrid has nowhere left to turn. She can't share the truth with anyone except the people she imagines flying over her at thirty thousand feet, and they don't even know she's there. But little does Astrid know just how much even the tiniest connection will affect these strangers' lives--and her own--for the better.

A.S. King has been called “One of the best Y.A. writers working today” by the New York Times Book Review and a recipient of the Margaret A. Edwards Award for lifetime achievement in writing for young adults. King is the author of novels including the 2020 Michael L. Printz Award-winning Dig.,Glory O'Brien's History of the Future, the 2013 Los Angeles Times Book Prize winner Ask the Passengers, and 2011 Printz Honor Book Please Ignore Vera Dietz, among others. Her most recent release, Switch, has been called "a work of literary genius" by Booklist. She is a faculty member at Vermont College of Fine Arts and spends many months of the year traveling the country speaking to high school students about trauma, emotions, and red velvet cake. After many years living self-sufficiently and teaching literacy to adults in Ireland, she now lives in Pennsylvania. Find more at www.as-king.com.

* "At once much more than a coming out novel and one of the best coming-out novels in years.... Funny, provocative, and intelligent, King's story celebrates love in all its messy, modern complexity."—Publishers Weekly, starred review

* "Another thoughtful, and often breathtaking, achievement for King, whose star is ascending as quickly as one of Astrid's planes."—Booklist, starred review

* "King's thoughtful, sad, funny, and frank book...will appeal to any mature teen resisting the pressure to conform or rebel [and] anyone who wants to define herself on her own terms."—School Library Journal, starred review

* "For kids struggling with their own truths, it can be hard to believe how much light there is once you come out of the cave. This is a book that knows and understands that, and it's one that readers will believe."—The Bulletin, starred review

"Astrid is a model of strength and compassion.... Good reading for everyone."—VOYA

"King has penned a work of realism that is magical in the telling."—Cooperative Children's Book Center