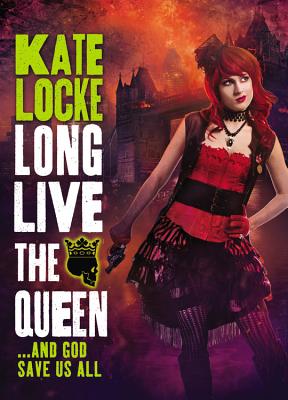 This is book number 3 in the The Immortal Empire series.

The fantastic conclusion to the Immortal Empire series that started with the spectacular God Save the Queen.

Xandra Vardan thought life would be simpler when she accepted the goblin crown and became their queen, but life has only become more complicated. Everyone -- vampires, werewolves, and humans -- wants the goblins on their side, because whoever has the goblins -- wins.

With human zealots intent on ridding the world of anyone with plagued blood and supernatural politics taking Britain to the verge of civil war, Xandra's finding out that being queen isn't all it's cracked up to be, and if she doesn't do something fast, hers will be the shortest reign in history.

Kate Locke is a shameless anglophile who wrote her first book at age twelve. Fortunately, that book about a British pop band is lost forever. During 'off' hours Kate spends time caressing her collection of Fluevogs, watches BBC America, or plays with makeup. She loves history, the paranormal, horror, and sparkly things.

"Locke has created a truly stunning world ripe with angst, anger and treachery, not to mention filled with complicated characters who are truly unforgettable. Fans of complex and gritty steampunk: Make sure this book and series are on your to-buy list!"
-RT Book Reviews (4 1/2 stars)

"A fantastic ride from beginning to end."
-Gail Dayton on God Save the Queen

"God Save the Queen is a fresh, witty, and darkly beautiful ride through a London ruled by a vampire Queen Victoria. Carried along by enchanting Alexandra Vardan you'll enjoy every minute of adventure and mystery."
-Philippa Ballantine

"[Locke] is as sparkly and tough as her writing; this series is grand fun for urban fantasy fans."
-Library Journal on God Save the Queen

"Locke's writing is smart and fast-paced, full of sharp dialogue and vivid detail. This stylish, original story is perfectly suited to a wonderfully constructed world."
-Publishers Weekly on God Save the Queen

"Delightfully hard-boiled attitude... this is a fun adventure all around."
-Locus on God Save the Queen