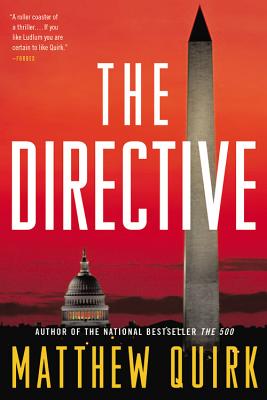 This is book number 2 in the Mike Ford series.

A pulse-pounding thriller about two brothers, billions of dollars, and the heist of a lifetime by the author of the national bestseller The 500.

After escaping the corrupt back rooms of Washington, DC, Mike Ford is again playing a dangerous game -- and this time the stakes are even higher. Mike's brother is in over his head in a powerful conspiracy to steal a secret worth billions from the rarely understood, vitally important trading desk at the Federal Reserve Bank of New York.

Trying to bail his brother out, Mike quickly finds himself playing a dangerous game, trapped into planning the heist himself, forced to call on all the skills of his criminal past in order to escape. In this sharp, fast-paced sequel to The 500, Mike Ford again stars as the cunning and courageous former con man with a big heart, and Matthew Quirk confirms that he is one of the most exciting thriller writers at work today.

Matthew Quirk studied history and literature at Harvard College. After graduation, he spent five years at The Atlantic, reporting on a variety of subjects, including crime, private military contractors, the opium trade, terrorism prosecutions, and international gangs. He lives in San Diego.

"Gripping...the action never lets up for a second, and the pages cannot be turned fast enough."
---Associated Press


"This ripping yarn springs and snaps along like a row of wolf traps."
---Newsday

"Quirk is such an expert in escalation that, like a frog in a pot of boiling water, you'll be done before you even realize it."—Entertainment Weekly