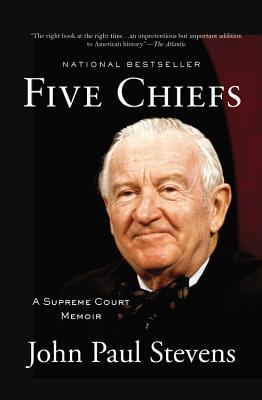 When he resigned last June, Justice Stevens was the third longest serving Justice in American history (1975-2010) -- only Justice William O. Douglas, whom Stevens succeeded, and Stephen Field have served on the Court for a longer time.

In Five Chiefs, Justice Stevens captures the inner workings of the Supreme Court via his personal experiences with the five Chief Justices -- Fred Vinson, Earl Warren, Warren Burger, William Rehnquist, and John Roberts -- that he interacted with. He reminisces of being a law clerk during Vinson's tenure; a practicing lawyer for Warren; a circuit judge and junior justice for Burger; a contemporary colleague of Rehnquist; and a colleague of current Chief Justice John Roberts. Along the way, he will discuss his views of some the most significant cases that have been decided by the Court from Vinson, who became Chief Justice in 1946 when Truman was President, to Roberts, who became Chief Justice in 2005.

Packed with interesting anecdotes and stories about the Court, Five Chiefs is an unprecedented and historically significant look at the highest court in the United States.

Justice John Paul Stevens served on U.S. Supreme Court from 1975 until his retirement in 2010. He is the third-longest serving Justice in American history. Born in Chicago, Illinois in 1920, Stevens served in the United States Navy during World War II and graduated from Northwestern University School of Law. He was appointed to the Seventh Circuit Court of Appeals in 1970 by President Richard Nixon and to the Supreme Court in 1975 by Gerald Ford. He was the author of two other books, Five Chiefs and The Making of a Justice. Justice Stevens passed away in 2019.

"Five Chiefs is a 248-page bow-tie; like its dignified author, and his famous sartorial flourish, an unpretentious but important addition to American history...At its core, the book is not just another memoir from yet another judge. It marks instead the end of an era on the Supreme Court and in the broader swath of American law and politics...Stevens' focused eye gives way to a hundred or so smaller points, some densely legal, some historical, some even funny...Five Chiefs is the right book at the right time. It's a brief and largely defanged reminder of some of what we have lost in public life with the demise of the "moderate Republican" on Capitol Hill and the "practical conservative" on the federal bench...A fine new book."—Andrew Cohen, The Atlantic

"An informative and very appealing new memoir of life on the Supreme Court...Justice Stevens not only shows extraordinary respect for the Court as an institution, but does the same for his former colleagues-even ones with whom he often disagreed...[It's] classic Justice Stevens: understated and generous to those he differs with, but absolutely clear on where he believes justice lies."—Adam Cohen, Time

"A gentle memoir by a decent and accomplished public servant. Stevens opts not for jabs or evening scores but rather for reminiscences...Laced with observations on the court's architecture, traditions and even its seating arrangements, it is the collected ruminations of a man who has served his country in war and peace, across the decades... His memoir is as gracious as its author and a reminder that Stevens is more than a longtime member of the nation's highest court. He is a national treasure."—Jim Newton, Los Angeles Times