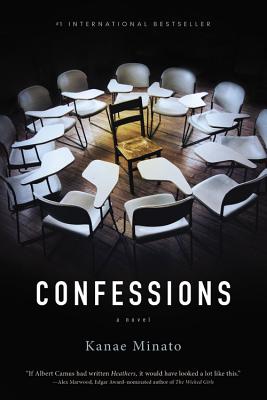 Her pupils murdered her daughter. Now she will have her revenge.

After calling off her engagement in the wake of a tragic revelation, Yuko Moriguchi had nothing to live for except her only child, four-year-old child, Manami. Now, following an accident on the grounds of the middle school where she teaches, Yuko has given up and tendered her resignation.

But first she has one last lecture to deliver. She tells a story that upends everything her students ever thought they knew about two of their peers, and sets in motion a diabolical plot for revenge.

Narrated in alternating voices, with twists you'll never see coming, Confessions probes the limits of punishment, despair, and tragic love, culminating in a harrowing confrontation between teacher and student that will place the occupants of an entire school in danger. You'll never look at a classroom the same way again.

PRAISE FOR CONFESSIONS
- Winner of the ALA's 2015 Alex Award for the Best Adult Books That Appeal to Teen Audiences- Nominated for the 2014 Shirley Jackson Award for Best Novel- One of Booklist's Best Crime Novels of the Year
"Far deeper and larger, though no less entertaining, than expected. A nasty little masterpiece...that rare creature in fiction: an ambitious exploration into the darkest corners of human nature ... that is also a crackling good yarn ... Resistance to the novel's narrative momentum is futile; I read it in a single sitting ... Along the way I learned much--more, if truth be told, than I felt emotionally prepared to learn--about the damage inflicted by adults upon children, and the ways in which the young sometimes return it in kind, twisted and magnified... Books like Confessions can make you vibrate with happiness."—Kevin Nance, Chicago Tribune

"A Japanese Gone Girl...Confessions will drop your jaw right to the floor. The most delightfully evil book you'll read this year. A gut-wrenching thrill-ride with clean, high-impact language."—Steph Cha, Los Angeles Times

"Kanae Minato is a brilliant storyteller, and CONFESSIONS is a superb and haunting work. As Minato expertly shifts the perspective from one character to the next, each change in perspective lends a startling new dimension to a gripping and profoundly unsettling tale. It's a novel I'll think about for a very long time."—Emily St. John Mandel, New York Times bestselling author of Station Eleven

"A chilling and effective psychological thriller...a reader is almost certain to be caught off guard more than once... Implacable, relentless and stunning."—Tom Nolan, Wall Street Journal

"Captivating...as the murders grow bloodier and bloodier, the characters more and more twisted, we find ourselves fascinated and repulsed, unable to look away...CONFESSIONS undercuts prejudices with force and ferocity."—Becca Rothfield, New Republic

"This compulsively readable novel is dark, disturbing, and deceptive. . . . The writing in Confessions is sharp and fast-paced and the impact of each chapter ratchets up the tension."—Laura Eggertson, Toronto Star

"CONFESSIONS is a dark, disturbing tale that twists and turns on itself like an Escher print. Just when you think you know where this thriller is going, Kanae Minato throws back the curtain to reveal another face to the mystery. A Lord of the Flies for the modern world, Minato mines the dark specter of youth, while simultaneously demonstrating some of the deeper perils of our global culture."—Jenny Milchman, Mary Higgins Clark Award-winning author of Cover of Snow

"Don't be fooled by the hypnotic beauty of Kanae Minato's prose. As the characters in CONFESSIONS are stripped of their secrets, the novel reveals its audacious dark heart. A pitch-perfect, riveting read."—Hilary Davidson, Anthony Award-winning author of The Damage Done and Evil in All Its Disguises

"It's time to unretire all of those back-of-the-book words that lost their meaning over the years-unputdownable, riveting, searing. CONFESSIONS is some uncanny kind of tour de force, and everyone should read it."—Charles Finch, Agatha Award-nominated author of The September Society and The Last Enchantments