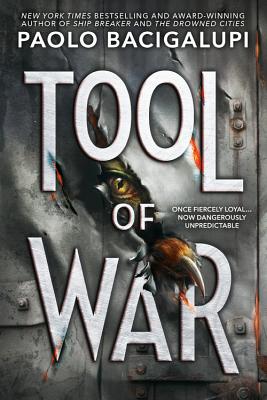 Set in a dark future devastated by climate change, Tool of War is the third book in a major adventure series by a bestselling and award-winning science fiction author and starring the most provocative character from the acclaimed novels Ship Breaker and The Drowned Cities.

In this gripping, eerily prescient sci-fi thriller that Kirkus described as "masterful," Tool--a half-man/half-beast designed for combat--proves himself capable of so much more than his creators had ever dreamed. He has gone rogue from his pack of bioengineered "augments" and emerged a victorious leader of a pack of human soldier boys. But he is hunted relentlessly by someone determined to destroy him, who knows an alarming secret: Tool has found the way to resist his genetically ingrained impulses of submission and loyalty toward his masters... The time is coming when Tool will embark on an all-out war against those who have enslaved him.

From one of science fiction's undisputed masters comes a riveting and all-too-timely page-turner that explores the intricate relationships connecting hunter and prey, master and enslaved, human and monster.

"Suzanne Collins may have put dystopian literature on the YA map with 'The Hunger Games'...but Bacigalupi is one of the genre's masters, employing inventively terrifying details in equally imaginative story lines." --Los Angeles Times

Paolo Bacigalupi is the author of the highly acclaimed The Drowned Cities, Tool of War,and Ship Breaker, a New York Times bestseller, Michael L. Printz Award winner, and National Book Award finalist. He is also the author of the Edgar Awards nominee The Doubt Factory; a novel for younger readers, Zombie Baseball Beatdown; and two bestselling adult novels for adults, The Water Knife and The Windup Girl. His first work of collected short fiction was Pump Six and Other Stories. He co-wrote The Tangled Lands with Tobias S. Buckell. The winner of the Hugo, Nebula, Locus, Compton Crook, John W. Campbell Memorial, and Theodore Sturgeon Memorial Awards, he lives in western Colorado with his wife and son. The author invites you to visit his website at windupstories.com.

Praise for Tool of War:
A 2018 Locus Awards Finalist for Young Adult Books


*"Bacigalupi's environmentally ravaged world remains both richly described and terrifying, his characters diverse and complex. Through Tool, he explores free will and the consequences of humans playing at being gods. ...Well worth the wait."
—Publishers Weekly, starred review

"Bacigalupi masterfully examine[s] larger questions about humanity, genetic engineering, loyalty, freedom, violence, and survival. This striking novel...is an all-too-timely reminder that humans' actions have the power to change the world for better or worse."
—The Horn Book

"Makes readers think about what it means to be human, the price of genetic engineering, and the inhumanity of the corporations who put profit above all else."
—Booklist

"A cleverly described, intricate, and equally desolate world. Fans of the series will love it, and...new readers will quickly understand the world."
—BCCB

*"Tool is at center stage at last as readers move through Bacigalupi's exploration of the intricate relationships connecting hunter and prey, master and enslaved, human and monster. Masterful."—Kirkus Reviews, starred review

"Bacigalupi's action scenes are brilliantly cinematic, powering the pacing with breathtaking superhero stunts. Tool, as ever, is a character impossible to forget."—Booklist

"Bacigalupi's future earth is brilliantly imagined and its genesis anchored in contemporary issues...The characters are layered and complex, and their almost unthinkable actions and choices seem totally credible. Vivid, brutal, and thematically rich, this captivating title is sure to win teen fans for the award-winning Bacigalupi." --Booklist (starred review)