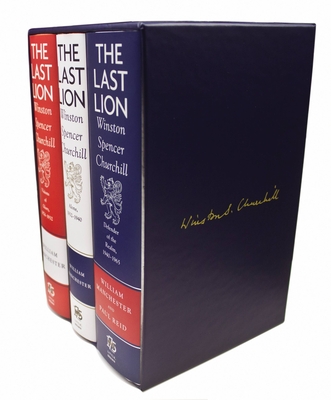 Universally acclaimed for their compelling narrative, their fresh insights, and their objective renderings of Winston Churchill's life, The Last Lion trilogy presents a revelatory and unparalleled portrait of this brilliant, flawed, and dynamic adventurer, aristocrat, soldier, and statesman.

Born at the end of the 19th century when Imperial Britain still stood at the splendid pinnacle of her power, Churchill would witness the shift a few years later as the Empire hovered on the brink of a catastrophic new era. One of the greatest wartime leaders of our time, he would go on to stand alone, politically isolated in Parliament, as he took the lead in warning of the growing Nazi threat, and would lead Britain to victory against Nazi Germany and the Axis powers in World War II.

Now, celebrated historian William Manchester's landmark biographies are collected together for the first time, along with the eagerly anticipated final installment Churchill's last years in power. More than thirty years in the making, The Last Lion is the definitive work on this remarkable man whose courageous vision guided the destiny of a nation during darkly troubled times-and who looms as one of the greatest figures of our century.

Paul Reid is an award-winning journalist. In late 2003 his friend, William Manchester, in failing health, asked Paul to complete The Last Lion: Defender of the Realm. He lives in North Carolina.

"Manchester has read further, thought harder, and told with considerable verve what is mesmerizing in its drama...One cannot do better than this book."—The Philadelphia Inquirer

"Manchester has such control over a huge and moving narrative, such illumination of character...That he can claim the considerable achievement of having assembled enough powerful evidence to support Isaiah Berlin's judgment of Churchill as 'the largest human being of our time.'"—Alistair Cooke, The New Yorker