City of Thirst (The Map to Everywhere #2) (Paperback) 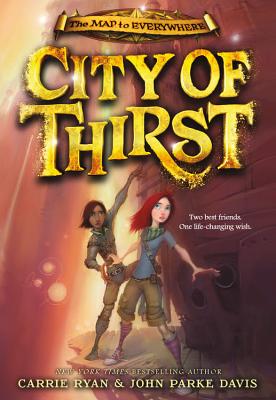 This is book number 2 in the The Map to Everywhere series.

New York Times bestselling author Carrie Ryan and John Parke Davis transport readers back to the boundless world of the Pirate Stream in this engaging and exhilarating sequel to the highly acclaimed The Map to Everywhere that is equal parts adventure, humor, and heart!

When the magical waters of the Pirate Stream begin flooding Marrill's world, the only way to stop the destruction is to return to the Stream and find the source of the mysterious Iron Tide. Reunited with her best friend Fin--who has been forgotten all over again--Marrill, her disbelieving babysitter, and the Enterprising Kraken crew must make the treacherous trek to the towering, sliding, impossible world of Monerva and uncover the secrets of its long-lost wish machine. Only there can Fin wish to finally be remembered. Only there can Marrill wish to save her world and all the people she loves. But to get everything they've ever wanted, Marrill and Fin may have to give up on the most important thing they already have: each other.

Husband and wife Carrie Ryan and John Parke Davis have been in love with each other's writing (and with each other) since meeting in law school a decade ago. Carrie is the New York Times bestselling author of the critically acclaimed and multi-award-winning Forest of Hands and Teeth series, which is based on a world she and JP created together. She is also the author of Daughter of Deep Silence and Infinity Ring: Divide and Conquer, and the editor of Foretold: 14 Tales of Prophecy and Prediction. JP is the First Assistant Federal Defender for the Western District of North Carolina, as well as a published author of short fiction. Although they've been important parts of each other's writing for years, the Map to Everywhere series is their first full collaboration. They live in Charlotte, North Carolina, and they invite you to visit their website at TheMaptoEverywhere.com.

Praise for City of Thirst:"The setting and the large supporting cast are of the 'anything goes' sort, and again the authors have concocted both with an adroit mixture of humor and wonder.... A fiery climax and a hard choice set Marrill on course for further adventures on the Pirate Stream. Avast!"—Kirkus Reviews

"Ryan and Davis spin a dizzying fantasy world full of bizarre creatures, twisted time lines, and a fascinating geography.... Readers who haven't read The Map to Everywhere should have no trouble starting with book two."—Booklist

Praise for The Map to Everywhere:
* "Ryan and Davis' swashbuckling quest features fantastic world building, gnarly creatures, and a villain who is both spooky and formidable.... The unique details, expert plotting, charming characters, and comic interludes combine in a tantalizing read."—Booklist, starred review

* "Wholly original.... This is an ambitious undertaking, and strong readers who enjoy adventure fiction and fantasy will inhale the first book in what has the potential to be an extraordinary series."—School Library Journal, starred review

* "Fast-paced and imaginative, this adventure combines action with whimsy, injecting emotion and pathos into an otherwise lighthearted romp. It's a strong start for what promises to be a highly enjoyable series."—Publishers Weekly, starred review