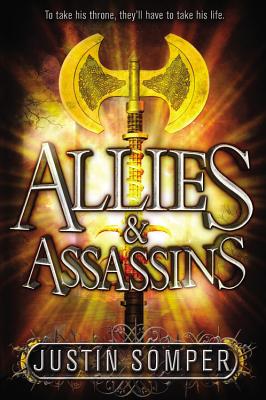 This is book number 1 in the Allies & Assassins series.

Sixteen-year-old Jared is the newly crowned Prince of All Archenfield, ascending the throne after his older brother's mysterious death. But Jared feels reluctant and unprepared to rule the Princedom and its dangerous and powerful court. Like each Prince of All Archenfield before him, Jared must rely on the Council of Twelve to advise him. But he knows he can just as easily be at their mercy--especially when it appears that one of the Twelve might have orchestrated his brother's untimely death. Propelled by his rage over the loss of his brother and wary of all his advisors, Jared can trust only Asta: a clever, strong-willed girl from the settlements, currently serving as the Physician's apprentice. Asta and Jared take it upon themselves to hunt down his brother's assassin--though the assassin may be hunting them, as well.
Murder, betrayal, and intrigue abound in Justin Somper's thrilling YA series debut. Exploring the political machinations of the medieval-esque court and the lives that hang in the balance, Allies & Assassins is a gripping tale of a teen torn between duty and revenge.

Justin Somper is the worldwide bestselling author of the Vampirates series, which has been published in 25 languages in 35 countries. When he isn't writing, he works with other authors as a publicist and trainer. He lives in London with his partner and two energetic dogs.

Praise for Allies & Assassins:"Drawing on premedieval Welsh courts for inspiration, Somper breathes life into the inner workings of his fantasy kingdom....With its focus on forensics investigation and suspense, this is both political thriller and royal drama....Solid and entertaining."—Publishers Weekly

"From the first page of this hefty volume, the Princedom of Archenfield is plunged into mystery, danger, and intrigue....Somper manages to keep the mystery alive with many red herrings, surprises, and plot twists, while deftly setting up the scenario for a sequel. Fans of medieval adventure, murder mysteries, and romance will all find something to like here, and readers will eagerly await the continuation of the this engrossing saga."—School Library Journal

"....Those who like the mechanics of forensic detective work will enjoy watching Asta and Jared attempt to logically and scientifically solve the crimes, unknowingly hampered by their lack of modern equipment and know-how. Both teens fight to be taken seriously, and their friendship is a solid component of the story, balancing the huge cast of characters. A cliff-hanger ending will leave readers wanting more."—Booklist

"Mystery lovers will be delighted...Prince Jared is sure to face plenty of political intrigue....This may be cause for comparison with Game of Thrones."—VOYA

"...A complex mix of infidelity, betrayals, political intrigue, and a hint of romance...the period atmosphere and adventure...provide Game of Thrones-inspired drama that will draw medieval buffs and fantasy fans."—The Bulletin