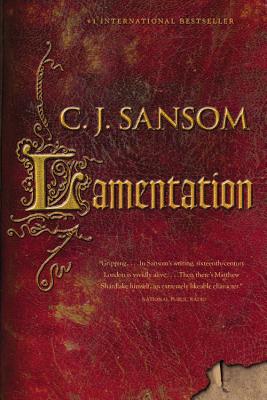 This is book number 6 in the The Shardlake Series series.

As Henry VIII lies on his deathbed, an incendiary manuscript threatens to tear his court apart.

Summer, 1546. King Henry VIII is slowly, painfully dying. His Protestant and Catholic councilors are engaged in a final and decisive power struggle; whoever wins will control the government. As heretics are hunted across London, and radical Protestants are burned at the stake, the Catholic party focuses its attack on Henry's sixth wife -- and Matthew Shardlake's old mentor -- Queen Catherine Parr.

Shardlake, still haunted by his narrow escape from death the year before, steps into action when the beleaguered and desperate Queen summons him to Whitehall Palace to help her recover a dangerous manuscript. The Queen has authored a confessional book, Lamentation of a Sinner, so radically Protestant that if it came to the King's attention it could bring both her and her sympathizers crashing down. Although the secret book was kept hidden inside a locked chest in the Queen's private chamber, it has inexplicably vanished. Only one page has been recovered -- clutched in the hand of a murdered London printer.

Shardlake's investigations take him on a trail that begins among the backstreet printshops of London, but leads him and his trusty assistant Jack Barak into the dark and labyrinthine world of court politics, a world Shardlake swore never to enter again. In this crucible of power and ambition, Protestant friends can be as dangerous as Catholic enemies, and those with shifting allegiances can be the most dangerous of all.

C.J. Sansom is the bestselling author of the critically-acclaimed Matthew Shardlake series, as well as the runaway #1 international bestsellers Dominion and Winter in Madrid. He lives in Sussex, England.

PRAISE FOR C.J. SANSOM AND THE SHARDLAKE SERIES:

"C.J. Sansom has long been one of my favorite writers."—Kate Atkinson

"Among the most distinguished of modern historical novelists."—P.D. James

"Sansom has an unerring sense of pace and a deft historical touch."—The New Yorker

"Sansom brings alive all levels of English society, from cutthroats and common soldiers to the king and queen themselves."—Washington Post

"Sansom seems to have born with, or instinctively acquired, that precious balance of creativity and research, history and humanity."—Chicago Tribune