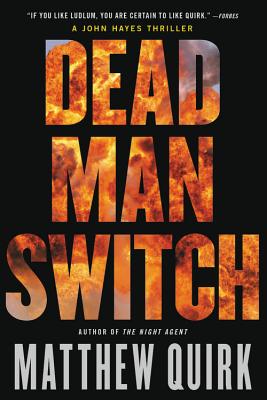 This is book number 2 in the John Hayes Series series.

Undercover operators are being hunted down in their homes — and the prime suspect is one of their own.

A deadly fall on a rugged stretch of California coast. A burglary gone wrong in Virginia. These incidents seem unrelated, but the victims were living undercover, their true identities closely held secrets. They are members of a classified team, the last line of defense against foreign threats. Now, someone is assassinating them, one by one, taking out family members and innocent bystanders to make the deaths seem like accidents.

Captain John Hayes, a special operations legend, has left the military to settle down with his family. But when he pieces together a pattern behind the murders and discovers that his protégée Claire Rhodes, a brilliant assassin, is the prime suspect, he returns to duty to unmask the attackers.

With every success, the killers grow bolder. Their ultimate goal: Lure Hayes and his remaining fellow soldiers to Manhattan, to eliminate them all in a single devastating strike. To save his teammates and thousands of innocent lives, Hayes must find a way to stop a seemingly unstoppable weapon.

Dead Man Switch delivers nonstop twists, turns, and action in a high-stakes thriller about what happens when the fight abroad follows our covert operators home — and their painstakingly constructed double lives are shattered.

Matthew Quirk studied history and literature at Harvard College. After graduation, he spent five years at The Atlantic, reporting on a variety of subjects, including crime, private military contractors, the opium trade, terrorism prosecutions, and international gangs. He lives in San Diego.

"This zippy book has the feel of a print version of an episode from Homeland. . . . The narrative moves with the speed of light."—Jack Batten, Toronto Star

"Matthew Quirk is a big-thriller-writing maniac. With his hallmarks of crisp prose, riveting research, and stunning action, he crafts his books so they're nearly impossible to put down. When it comes to Quirk, I follow a simple three-step plan: Buy, cancel plans, read."—Gregg Hurwitz, New York Times bestselling author of Orphan X and The Nowhere Man

"A tour de force. Dead Man Switch turns the intelligence community's 'wilderness of mirrors' into a high-speed racetrack, delivering twist after twist toward a literally explosive conclusion. More than that, Quirk shows us the human cost of living-and dying-on the gray edges of national security, and creates characters whose choices feel powerful and real."—Joseph Finder, New York Times bestselling author of Paranoia and Guilty Minds

"Dead Man Switch is a one-sit read that hops from one action-filled vignette to another from first page to last. As exciting as most of the book is, the last quarter is a no-brake roll against the guard rails, and one member in particular is the subject of a revelation no one will see coming."—BookReporter

"Quirk's deft plotting and superior action scenes are what make the book tick. But the author also has a nice way of getting the most out of his characters and his varied locales without falling back on clichés. An excellent follow-up to Cold Barrel Zero, this is a standout thriller."—Kirkus Reviews

"A fine thriller . . . Quirk is a master at organizing details--smoke, a chill wind, a splash of water--to create suspense. . . . Fans of special-ops thrillers will devour this latest entry in Quirk's fiery action series."—Booklist

"Thriller fans who enjoy a fast-paced, action-packed story with plenty of twists will be rooting for Hayes every step of the way."—Library Journal