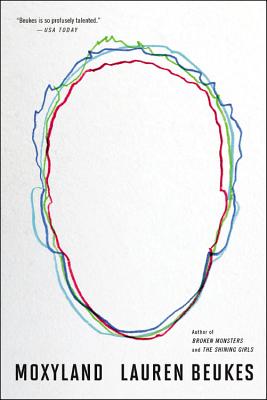 Kendra, an art-school dropout, brands herself for a nanotech marketing program. Lerato, an ambitious AIDS baby, plots to defect from her corporate employers. Tendeka, a hot-headed activist, is becoming increasingly rabid. Toby, a roguish blogger, discovers that the video games he plays for cash are much more than they seem.

Lauren Beukes writes novels, comics and screeplays. She's the author of the critically-acclaimed international bestseller Broken Monsters; The Shining Girls, about a time traveling serial killer; Zoo City, a phantasmagorical Joburg noir and winner of the 2011 Arthur C Clarke Award; and the neo-political thriller Moxyland. She worked as a journalist and as show runner on one of the South Africa's biggest animated TV shows, directed an award-winning documentary, and wrote the New York Times bestselling graphic novel, Fairest: The Hidden Kingdom. She lives in Cape Town, South Africa.

"Moxyland does lots of things, masterfully, that lots of science fiction never even guesses that it could be doing. Very, very good."—William Gibson, author of Neuromancer

"The world Beukes has invented is both eerily familiar and creepily different."
—Cosmopolitan

"This fast-paced sci-fi trip has intriguing characters, big ideas, a new lexicon [and] serves as a global warning."—GQ