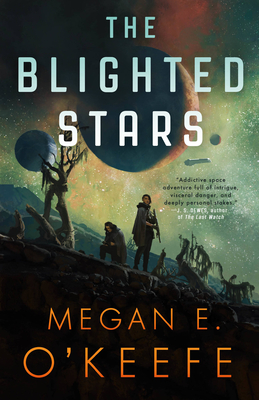 When a spy is stranded on a dead planet with her mortal enemy, she must first figure out how to survive before she can uncover the conspiracy that landed them there. This first book in a new epic space opera trilogy by award‑winning author Megan E. O'Keefe is perfect for fans of Children of Time, Semiosis, and Ancillary Justice.

She's a revolutionary. Humanity is running out of options. Habitable planets are being destroyed as quickly as they're found and Naira Sharp thinks she knows the reason why. The all-powerful Mercator family has been controlling the exploration of the universe for decades, and exploiting any materials they find along the way under the guise of helping humanity's expansion. But Naira knows the truth, and she plans to bring the whole family down from the inside.

He's the heir to the dynasty. Tarquin Mercator never wanted to run a galaxy-spanning business empire. He just wanted to study rocks and read books. But Tarquin's father has tasked him with monitoring the settlement of a new planet, and he doesn't really have a choice in the matter.

Disguised as Tarquin's new bodyguard, Naira plans to destroy the settlement ship before they make land. But neither of them expects to end up stranded on a dead planet. To survive and keep her secret, Naira will have to join forces with the man she's sworn to hate. And together they will uncover a plot that's bigger than both of them.

For more from Megan E. O'Keefe, check out:

Megan E. O’Keefe was raised amongst journalists, and as soon as she was able, joined them by crafting a newsletter which chronicled the daily adventures of the local cat population. She has worked in both arts management and graphic design, and has won Writers of the Future and the Gemmell Morningstar Award.

Megan lives in the Bay Area of California.

"The Blighted Stars delivers a first-in-series that's smart, incisive, and utterly gripping. Megan O'Keefe's masterful storytelling will draw you into a complex, brutal, yet hope-charged world, break your heart, and leave you begging for more."—Rowenna Miller, author of Torn

"Brimming with unconventional gender dynamics and shifting identities, The Blighted Stars is character-driven science fiction at its best—a taut novel with human questions at its heart."—E. J. Beaton, author of The Councillor