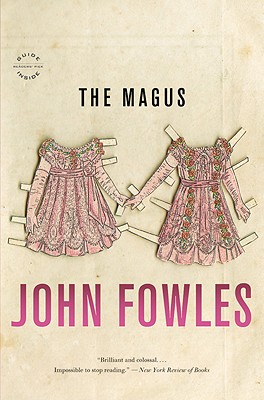 Widely considered John Fowles's masterpiece, The Magus is "a dynamo of suspense and horror...a dizzying, electrifying chase through the labyrinth of the soul....Read it in one sitting if possible-but read it" (New York Times).
A young Englishman, Nicholas Urfe, accepts a teaching post on a remote Greek island in order to escape an unsatisfactory love affair. There, his friendship with a reclusive millionaire evolves into a mysterious--and deadly--game of violence, seduction, and betrayal. As he is drawn deeper into the trickster's psychological traps, Nicholas finds it increasingly difficult to distinguish past from present, fantasy from reality. He becomes a desperate man fighting for his sanity and his very survival.
John Fowles expertly unfolds a spellbinding exploration of the complexities of the human mind. By turns disturbing, thrilling and seductive, The Magus is a masterwork of contemporary literature.

John Fowles (1926-2005) was educated at Oxford and subsequently lectured in English at universities in Greece and the UK. The success of his first novel, The Collector, published in 1963, allowed him to devote all his time to writing. His books include the internationally acclaimed and bestselling novels The Magus, The French Lieutenant's Woman, and Daniel Martin. Fowles spent the last decades of his life on the southern coast of England in the small harbor town of Lyme Regis.

"Brilliant and colossal....Impossible to stop reading."—New York Review of Books

"Great, good, lavish, eerie, fun....The Magus is a stunner....It is at once a pyrotechnical extravaganza, a wild, hilarious charade, a dynamo of suspense, a profoundly serious probing into the nature of moral consciousness, a dizzying, electrifying chase through the labyrinth of the soul... Read it in one sitting if possible--but read it."—Eliot Fremont-Smith, New York Times