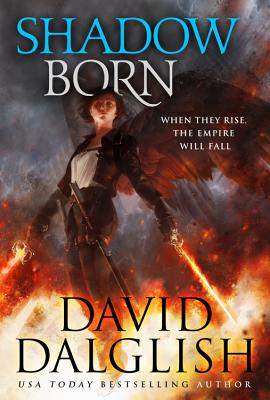 By David Dalglish
$19.03
Not Available

This is book number 3 in the Seraphim series.

What started as a small rebellion has grown to all-out war, with the four minor islands uniting under the call for independence. But Kael Skyborn no longer trusts the mysterious leader of their rebellion, nor his disciples. Neither side seems willing to reveal the truth of the elemental prisms the Seraphim wield in battle, or the blood that keeps the islands from crashing down to the ocean below.

Bree Skyborn is the Phoenix of Weshern and the face of the rebellion. But when Kael is captured and brought to Center for execution, Bree no longer cares about the war or the call for independence. All that matters is rescuing her brother and putting a stop to the violence for once and for all.

Both sides hold secrets that could be their undoing.

David Dalglish currently lives in rural Missouri with his wife Samantha, and daughters Morgan, Katherine, and Alyssa. He graduated from Missouri Southern State University in 2006 with a degree in Mathematics and currently spends his free time dying for the umpteenth time in Dark Souls.

"A must-read for fans of Michael Sullivan and Brent Weeks."—Library Journal on Skyborn

"Once you pick up Skyborn you won't want to put it down...I expect this series to fly off the shelves."—Kelly McCullough on Skyborn

"A soaring tale that nails the high notes. Skyborn had me gazing heavenward, imagining what could be."—Jay Posey, author of Three, on Skyborn

"A high-flying, dynamic adventure [that] soars confidently and will appeal to teens and adult audiences alike."—Publishers Weekly (starred review) on Skyborn

"Dalglish...begins a fresh epic fantasy series with a richly imagined world...Dalglish's high-flying action sequences are crisp and exciting, and he sets the stage for book two with a solid ending that will have readers eager for the next installment."—Booklist on Skyborn